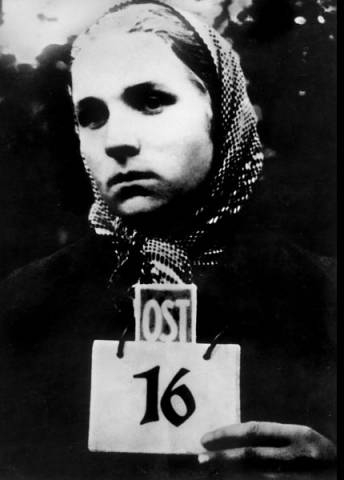 In the years of WWII the Germans conducted mass deportation of the civil people from the USSR and East Europe to work in Germany. In general five million people (Poles, Russians, Ukrainians etc.) were deported this way. 2,5 million of them were from Ukraine, 1,5 million – from Poland, 400 thousand – from Belarus. Not so many Russians because the Germans could not capture densely populated regions of Russia and big cities except for Rostov-on-Don (1942) and Voronezh (1942-43). Such people were called “Ostarbeiters” by the Germans.

Life of “ostarbeiters” resembled life of guest workers from Tajikistan in modern Russia but with stricter limitations. They lived in special places like labor camps, dormitories and worked for twelve hours a day six days a week.

They earned about 1/3 of the salary of a German paid for the same work. Besides, the cost of food given by the “employer” to a worker was deducted from this sum.

They were forbidden to move freely along Germany and to have sexual contacts with the Germans. To be more precise, a German man could have sex with a female “ostarbeiter” (he was not punished for that) while a German woman who had sex with an eastern slave was severely punished by sitting at a pillary and sending to a concentration camp. It was considered to be a threat for “cleanness of the German race”. Mariupol, Ukraine. 1943. The agenda of deportation to Germany for some woman. Kiev. Women are about to be deported to Germany as “ostarbeiters”. On some days they sent about ten thousand of “white slaves” to German for labour. The women arrived at the German land. The process of registration. In the dormitory – some women came with children if they had nobody to take care of them on the native land. Ukrainian ostarbeiters are standing in the line for food in Ingolstadt (Bavaria). The Czech workers at the “Siemens” factory. All major German companies used slave labor during the war. The passport belonged to a young woman from Smolensk, Russia. 7th of February, Altenburg (Thuringia). The German woman is punished for contacts with an ostarbeiter. She is subjected to public humiliation at the square. The inscription on the tablet reads something like, “I am an outcast of the society”. November 15, 1940 in Eisenach. The Poles are standing at the pillory. The one whose face we see had a sexual relationship with a German woman. The inscription reads: “I am the polluter of the race”. Zuttrop. West Germany. May 3, 1945. Fifty seven Russian Ostarbeiters were shot by the SS during the retreat and buried in a mass forest grave. The grave was found by American soldiers of the 95th Infantry Division. It’s the description of the photo from the American archive. After this discovery the Americans brought local Germans there and forced them to dig the corpses out. Then they were forced to make a so-called “obligatory examination” of the victims of the German Nazism. On the picture above the German woman closes eyes of her son while passing the bodies by. The German man dug out a shot Russian baby. Reburial of the shot ostarbeiters. After the liberation. The women are standing at the collection point of ostarbeiters for repatriation. However not everyone wanted to go back home. 450 thousand of former captives from the USSR stayed in the West.
But it’s already another story…

40 thoughts on “Ostarbeiters: Guest Workers of the War Time”