Now it’s hard to imagine the times when the whole life of the city almost fully stopped when it became dark. The light came only from rare street lanterns and windows while the tall buildings were like dark towers against the background of the sky illuminated by stars and the moon.

Now it is also hard to imagine that the Kremlin was almost impossible to see in the dark only some 150 years ago. The first experiments with its illumination began only in the XIXth century and the Kremlin was illuminated only on special occassions.

Among such occassions were coronations that were traditionally held in the Moscow Kremlin despite the fact that the official capital was St. Petersburg.

Now we are going to see what the Kremlin illumination was like since the middle of the nineteenth century. 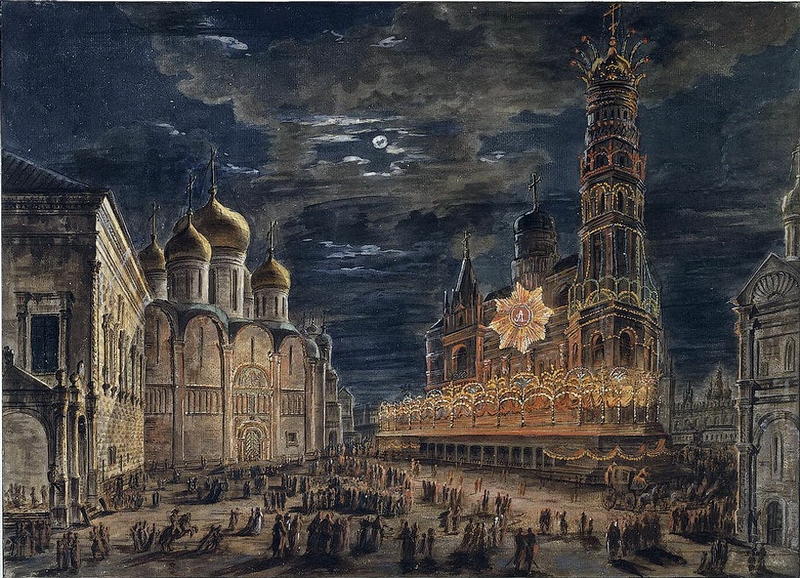 On the picture are ceremonies of coronation of Alexander I in 1801. In August 1856 they held the coronation of Alexander II in Moscow. Illumination of the Moscow Kremlin in 1883 for the coronation of Alexander III.

In 1856 they illuminated the Resurrection Gate and the Kremlin again.

There was no electricity, of course. The illumination represented the complex system of lamps ignited simultaneously with the powder line.

It is when electric lighting was massively applied for the first time. Preparations were started three months before the coronation itself. They constructed temporary power plants and power cables were stretched to the Kremlin. It was “Siemens and Halske” company to do it. This is how Moscow looked like in 1896 during the ceremony of coronation. For the citizens of the city it was a magic spectacle. The Kremlin suddenly became illuminated right at the moment when the Empress took a bunch of electric flowers in her hands. It was like a fire painting art in the dark sky. The people who saw it were stunned. They were striving to see the crowned reigning couple at least for a single moment. There was no enough electricity for the coronation though, so they also used the energy from the power station of the bathhouses of Sandunov. It reads “Glory to the Leader of October”.

The power station that is located right opposite the Kremlin was rebuilt by the 10th anniversary of the revolution, and it still functions, by the way. The illumination itself was changing as well. Till the mid of the twentieth century they illuminated the contours. The photo was taken during the celebration of the 800th anniversary of Moscow in 1947. This is how the Kremlin was illuminated for the 50th anniversary of the revolution. However in the second half of the twentieth century they illuminated the Kremlin more smoothly. Last year they decided to change the concept of the Kremlin illumination again but it is still unknown how exactly it will look.

5 thoughts on “Illumination of the Moscow Kremlin Through Time”