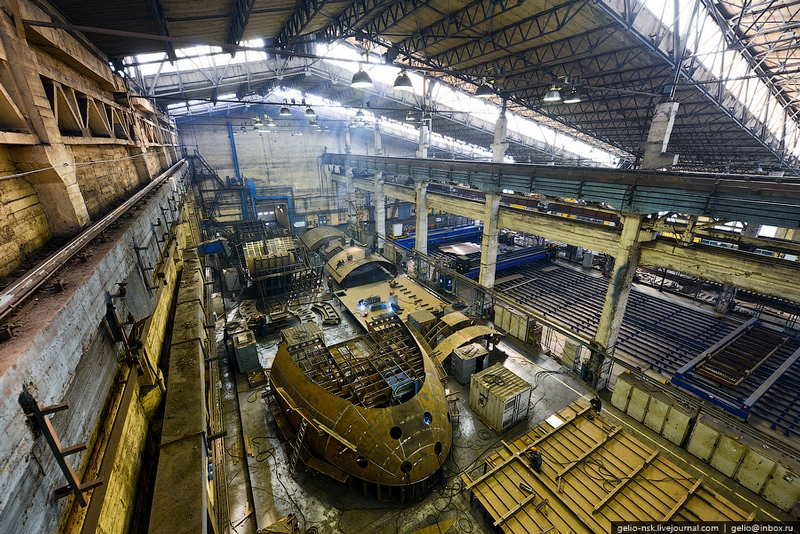 Here are some photos from the two largest shipyards of Saint-Petersburg: “Baltic shipyard” and “Admiralty Shipyards”.

The second one is one of the oldest shipyards in all Russia. It is also the first industrial company of St. Petersburg (since 1704). For the period of more than 300 years the shipyard built more than 2600 ships of various types and classes: the first Russian ships, battleships and cruisers, the world’s first nuclear-powered icebreakers, research and submersible vehicles, tankers, more than 300 submarines of different projects that have no analogues in the world shipbuilding. A submarine is being built. They plan to build three submarines for the Black Sea Fleet in the nearest time. The stealth submarine of project 636 is called “the black hole in the ocean” by foreign specialists. “The Baltic shipyard” is one of the leading shipbuilding companies of Russia. It is the only Russian manufacturer of large propellers weighing up to 70 tons with a diameter of up to eight m in bronze and brass. The floating crane with lifting capacity of 350 tons is one of the largest in the north-west Russia. It helps to complete the construction of ships afloat. The crane is 76 meters (250 ft) high. Baltic shipyard is producing equipment for nuclear and stationary energetics, chemical, oil and gas and other industries. These are spiral staircases for the cruiser “Rurik” (1909). We hope the story of the shipyards will last many years more.