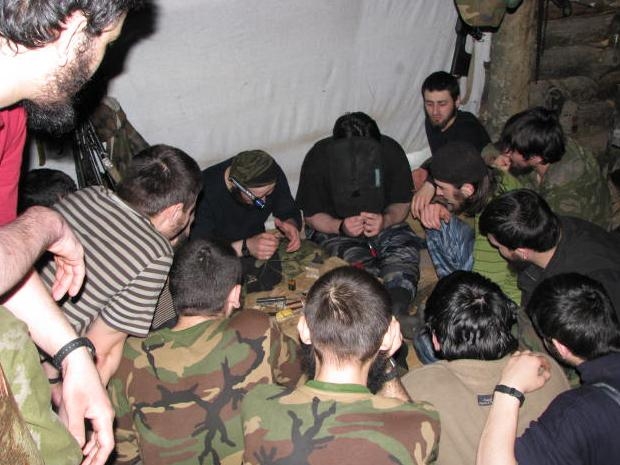 Here you can see how they make improvised explosive devices in Ingushetia. Such weapons are used to kill people and destroy various objects.
On the picture above the people are just going to make some “hellish machines”, as they call them.

The process is not so difficult but is always connected with risk. They can become the first and the only victim of their own weapon. Of course, such devices are far from being reliable. Successful planting is already a big luck. But someone can find and neutralize it. Or it may explode in a wrong moment or not to explode at all.

Some bandits have recently exploded themselves while making a bomb. But more often it is a pail filled with foam. It’s classics. When a robot completed its task they can examine the device. It’s the pail after the work of the destroyer. When they have no robot, people are evacuated.

Why is it all kept in the yard? Because keeping them in a neutral place is only additional risk. It might happen bandits would not be able to reach a stash. They are afraid of ambush and being killed from there. It’s not so beautiful as floating on the crest of a blast wave…

4 thoughts on “Homemade Weapons of Terrorists”