These missile systems have been recently prohibited from supplying to Iran. In such a way Russia satisfied the request of the USA and Israel.

To disguise the components of the system they use life size inflatable mocks. 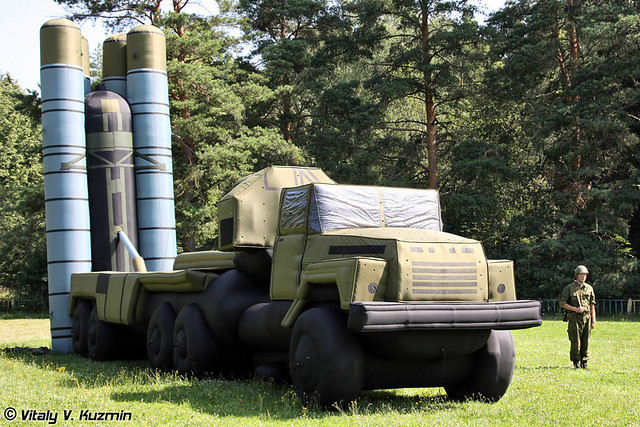 S-300 are intended for defence of large industrial and administrative objects, military bases and control points of air and space enemy attacks. However it can also shoot down a missile. Officialy the system has never participated in wars. However this Soviet old model hit all the targets during training.

Moscow is equipped with some circles of air defence. Such circles are represented by dozens of military units with air defence complexes located in various places of the Moscow region and in the capital itself.

Here is one of such military units. The giant radar station will immediately react if the control point gets information about airspace violation. The disadvantage of the system is that it launches missiles in a semi-automated mode, so it needs participation of a man. Its deployment time is five minutes.

They had been cutting forests and building stationary towers to place antenna posts.

Though there are no guards on the watch towers which is so careless. The launchers carry four transport-launch containers with missiles, they are equipped with the system of autonomous power supply and mounted on the chassis of heavy road vehicles. They are already covered with ice. These are tanks with sand and water. This is the way to contact with the control room. This is an autonomous generator for powering the control room and locators. In fact the military unit is huge, it’s only one part of it. Snow will cover it all.