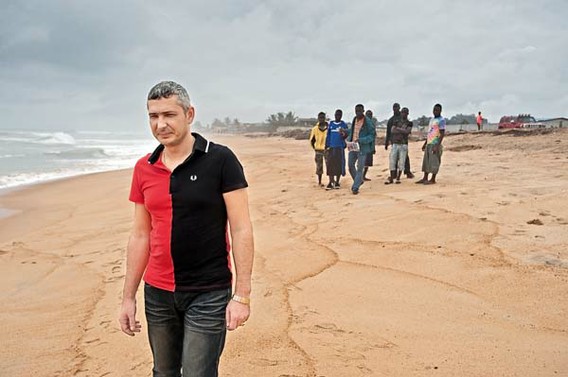 In Liberia he is a local celebrity. Sergey Chernyshev is the only white Ukrainian who drives a red “Hummer” there. He moved to this western African country three years ago and opened a casino there.

He says he had no choice. He possesed much equipment he could not use in Ukraine anymore. Ten years he had spent in Ukraine led to nothing. He had a gambling business in Ukraine: 424 gambling parlors and 2,5 thousand of workers. But then the government imposed a ban on gambling and he had to close his business.

He started to search for a country where he could use his experience and equipment. Finally he chose Liberia. The country has just ended a protracted civil war. It had a lot of diamonds and gold in its depths. There were only two casinos for the whole poor and small state. But the businessman believes the bigger the country the more gamblers are in it. People believe in luck. A guard meets Sergey at the casino. He brought all the machines to Liberia. It’s a paradise for business, as Sergey says. Nobody controls you, there is no tax inspection at all. Contributions to the budget of the country Sergey personally discussed with the Deputy Minister of Finance of Liberia. By the way, according to the Ukrainian businessman, members of the Government can be found sitting in underpants on the steps of the department. It’s too hot! They agreed on 7% from his profit. And he counts his profit himself. His business was a success and soon he decided to mine gold as well. He spent half a year to obtain a license.

It was a nice story how he was obtaining the license:

Now he knows that one should not give anything in advance in this country. If you fail you even won’t have anyone to complain to.

They live according to “the traditional law” as they call it which is like the law of the jungle.

When his official representative took him to the land where he was going to mine gold locals met him hospitably. Old people were dancing, women spat chewed potatoes in his face which was considered to be a sign of big respect, children pulled feathers from live chickens and inserted in his hair. He thought nothing more was going to happen, but then he saw local men bringing their women to him saying they wanted a good child and offering Sergey to sleep with them.

It was not polite to refuse. He told them a story, using a translator, that he got married in a special temple and didn’t have a right to sleep with any other women. Violation of this rule would bring big problems to him are those who are concerned. No good children would be born anyway. All babies would be ugly and defective.

By the way they all have lovers: both men and women. It’s normal for them. Gold is almost lying under feet there. There are stones on the ground with inclusions of precious metal.

They investigated the land in daytime, at night jungle turned into a scary live organism where everyone tried to eat you. They do not believe in God, only in Devil and they often call it. The devil is represented by a local shaman, all in feathers and white lime, he is called to punish a thief, for example. Thus he once appeared and cut off two ears of one woman who was accussed of theft. Then he started to cut off skin belts from her back. Finally they threw her bleeding body into a pit.

Her sons were also punished and thrown into a pit. Sergey asked the locals what had been stolen, they answered it had been a can of Coca-Cola.

Sergey once found himself in the local prison, someone had signed a warrant for 1,5 thousand dollars with his name… The prison was either a cage full of people or a pit covered with a grid. Liliya, Sergey’s wife, paid them to free her husband. She has been here, with Sergey, from the first day. She helps him with his business and cooks Ukrainian and other food. It’s hard to find necessary ingredients for borsch, but sometimes she manages to cook it.They often eat seafood – it’s always fresh. They live near the ocean and pay eighteen thousand dollars a year for it. Sometimes the waves are too high and can wash something away. Barbed wire is necessary because locals like to steal something.

By the way, locals used the territory near his house as a toilet till the president of the country personally forbade to do this.

The couple has a dream – they want to earn enough money and come back to their native land.

10 thoughts on “Who Lives Well In Africa?”