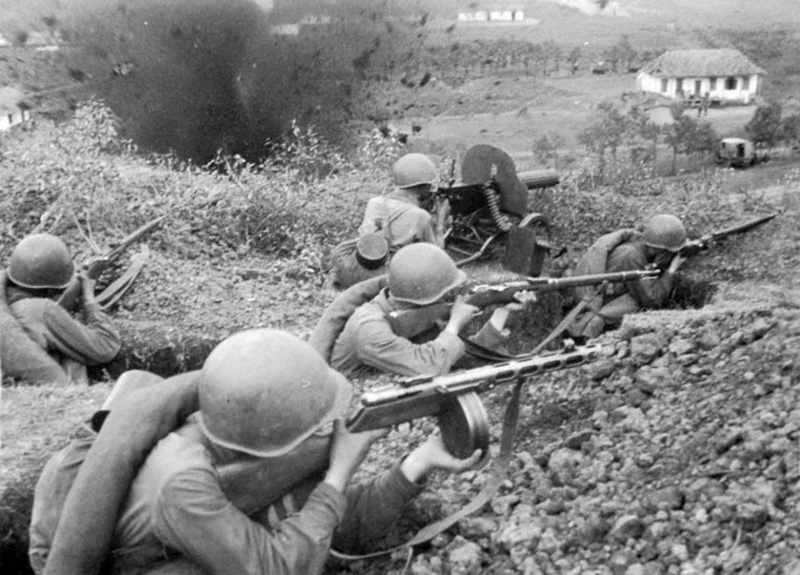 The Battle of the Caucasus is a name given to a series of Axis and Soviet operations in the Caucasus area on the Eastern Front of World War II. Some photos of the memorable events are below in the post. A group  of aircrafts Il-2 is flying in the sky. Soviet intelligence agents are crossing the water obstacle in the Krasnodar region. Soviet horses are in the mountains of the Caucasus. Soviet liberators of Crimean village are at the North Causasian front, 1943. Red Army soldiers are capturing the destroyed German tank Pz.Kpfw. IV Ausf F-2. The tank does not have a bow gun. German tankman is watching the burning oil storage in Maikop. The Soviet soldiers are fighting for Crimean village with help of T-34 tanks. German soldiers are on the armored troop-carrier Sd.Kfz. 251. This is a voluntary helper of Wehrmacht. He carries a machine gun MG-34. Caucasus. Mountain rangers are in the Caucasus Mountains. German soldiers are going along the snowy mountain slope. The Soviet tankman is on the captured German tank Pz.Kpfw IV in Vladikavkaz. German mountain huntsmen are in the Caucasus. August, 1942. Hero of the Soviet Union, fighter pilot Antonov, who, according to some documents was shot down, according to other ones – was captured by the Germans. His destiny is unknown. Aviation Regiment of Women which participated in the liberation of Taman peninsula. This is the battle in Gizel village, the Vladikavkaz region, where the attack of the German troops in the North Caucasus was stopped. 7th of November, 1942.

20 thoughts on “The Battle of the Caucasus”