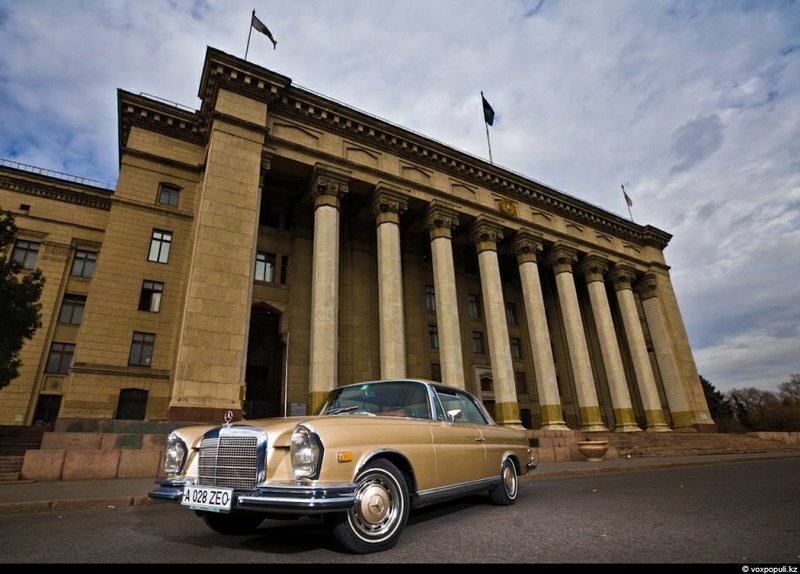 These cars always stand out from the rest. A photographer Maxim Shatrov met with the owners of stylish retro cars whose hobby is quite expensive. But the result seems to worth it. Simbek was born and grew in the aul. He liked cars since childhood, made them from aluminium wire. After the army he worked as a driver in the aul. It’s when he started to assemble his first car Zhiguli of 1974. Simbek started to assemble it in the beginning of the 90s, after the USSR collapse. He recollects that only civil servants and WWII veterans drove such cars. He spent 15 000 dollars for the GAZ. Grandfather of Simbek came from the war by this car. The roads of the aul were not suitable for it so it was not used much. In the beginning of the 70s it was in a poor condition and stood in the garden. Seven years ago Simbek tried to restore the car. It was hard because original spare parts were almost impossible to be found. All in all Simbek spent 35 000 dollars to restore this GAZ. This car belonged to a friend of Simbek’s father. The spare parts were searched all over the world, relatives and friends were helping too. The restoration of this car cost 20 000 dollars. This is Mercedes-Benz E280.

The owner of this car, Mukhtar, works in a commercial company, retro cars are his hobby. This car was produced in 1971. Mukhtar fell in love when saw it. It was made for the USA but brought to Japan while it was made in Germany. The Kazakh people brought it from Japan to Pavlodar. The Kazakh buyers planned to use it for solemn events but their business was not successful and they had to sell it. So Mukhtar bought for 30 000 dollars. He has already participated in the rally and magazines are having some interest to the car too. It was bought in 2000 by Andrey as a scrap heap. He invested 12 000 dollars to restore the car. Two “Pobedas” are waiting for their turn in his garage. The “Moskvitch” is being used for various rallies and photoshoots. Pavel bought this car 10 years ago and was restoring it for three years. It was also hard to find origibal parts. He was doing everything by himself. He plans to sell it and restore some other car. Alexander inherited the car from his granddad. It was standing in the garage unneeded for a long time. By now he has invested 3 000 dollars to restore it. Many people offered to buy it but Alexander doesn’t want to sell the car of his grandfather. The owner of this car has turned his hobby into business and his cars are for rent. He bought three “Chaikas” when the USSR collapsed, each cost 60 000 dollars. At that time a flat could be bought for 10 000 dollars! The cars were in a satisfactory condition. One “Chaika” was successfully sold for 80 000 dollars and taken to Germany. Two cars remained. The owner of this car, Sapar, says that there are only three cars like this are in his city. He invested 6 000 dollars. All parts are original. Gleb has always dreamt of the first model of “Zhiguli”, finally bought it one year ago for 1 500 dollars from one disabled person. It was in a good condition with the mileage only 60 000 km (37 000 miles). Gleb invested 600 dollars in the car to repair the motor and order the wheels. He made a lowrider retro car from it. He bought this GAZ from his neighbour in Almaty, Kazakhstan for 7 000 dollars two years ago. Now he plans to sell it for 15 000 dollars. It was brought from America six years ago. Nothing was invested – it was in a good condition. The car is exclusive and costs really much. Elvis Presley had five Cadillacs like this. And Eldorado was allegedly his favorite. It has a powerful 8,2 litres motor, 400 hp. There is only one car like this in Kazakhstan. But there is another red Cadillac 1965 that belongs to the brother of this man who owns the Cadillac Eldorado. The Eldorado is often used for weddings and video clips. It was bought for 4 000 dollars and the same sum was invested. It was in a perfect condition. Some parts were repaired a bit. This car was even shot in a movie.

Do you want to have a retro car?

10 thoughts on “My Expensive Hobby”