Kuyalnik used to be a very famous mudbath. 200 years ago doctors concluded that local mud had magical properties and convinced the city authorities to build a mudbath here. People from all the Empire used to come here for improving their health. Soviet people liked mud treatment as well. They even had to build three more buildings to accept all comers. 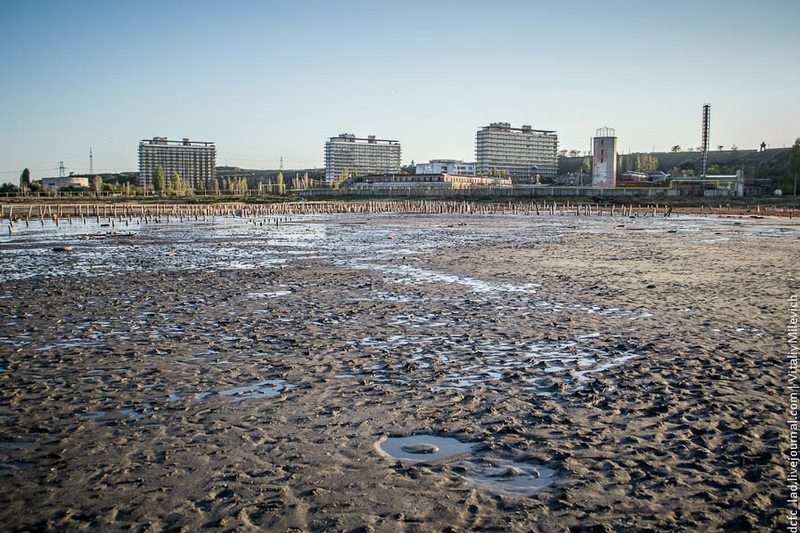 Local mud could allegedly heal any desease – starting from skin deseases and ending with osteochondrosis and prostatitis. It’s easy to treat with mud: one just needs to apply it over the body and wait till everything becomes well… Or one can take a mudbath.

They used to bring mud to the place by boats. Later they started to use automatics. This pipe was used to pump the mud from the firth to the sanatorium. This is how it looks from the side of the firth. The sanatorium still works but most part of the buildings are in a horrible condition, some are simply abandoned. The mud is rather viscous and sticky.

This firth is rich not only in mud but also in salt. It had been extracted here from time immemorial up to the beginning of the 1930s. The salt was mined in the artful way. Hundreds of sticks were hammered in the bottom of the firth. It’s not the remains of some old pier – they placed partitions between them, water in the formed cells dried leaving salt on the bottom which was later collected. This simple. These posts are more than 200 years! In summer, due to the heat, salt comes on the surface. Just recently it was the bottom of the firth. But Kuyalnik will fully dry out soon. The main reasons are: illegal extraction of sand, numerous dams on the Kuyalnik river and summer drought. This is approximately how the firth looked one hundred years ago. It was rescued then by connection with the sea.