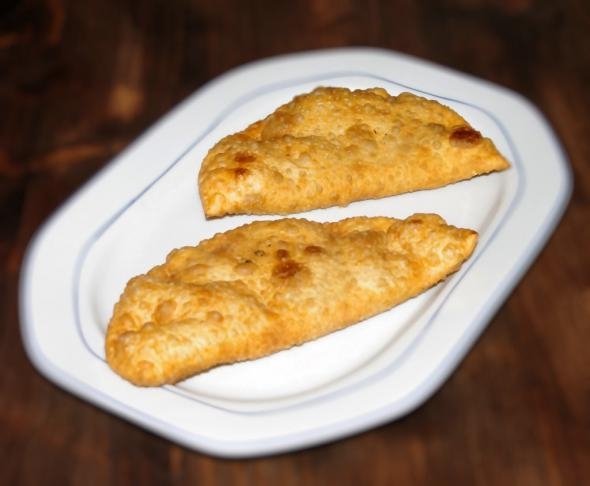 Chebureki or meat pasties do not leave indifferent anyone. They are good in any weather and especially in cold days. The main ingredient you need to make chebureki is lamb, and the fatter it is the better. This is it, from both sides. The meat is defrosted and matured for three days. It smells so good! Now we separate the meat from the bones and cut it into chunks. The meat is to be grinded (pay attention to the two-bladed knife). The knife does its work well! We do the same with onions. Such knife can save a lot of money and replace you cool modern food processors. We add salt and pepper. But chebureki need some water to be added as well. But we better add some ice! Then we should mix it all and put aside. Dough is rather simple. We need water, flour, salt. Flour is to be sifted first. Then we knead the dough with hands. And we make such a ball. We cover it and leave it to stay for an hour. It’s time to cook, ladies and gentlemen! We should put the pan with oil on the fire. The dough is separated, stretched and cut into circles which are to be flattened. We roll out the dough into a big circle. Our mince is quite elastic – we spread it on the dough from one side. And we cover it with another side to make a half moon shape. Then we cut the edges with a plate or something. The edges shouldn’t open while being fried. Chebureki should float in the oil. They should become ruddy from both sides. Do not delay and eat them immediately! They always should be served at once. Now the cold day is not so cold!