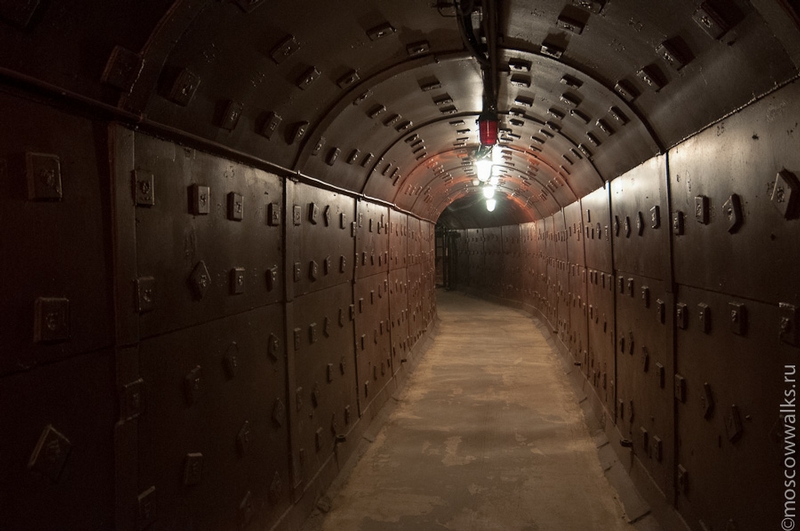 Looking at this photo you may exclaim “some bunker again!” Is there anything we haven’t seen yet? But yes, there is. This one is in Moscow.  It has a museum inside, but it’s only the small part of the whole structure. It is quite here, only sounds of trains can be heard in the distance. From the moment of the bunker construction in the 1950s and till 1986 here used to be a command point of long-range aviation. In the times of “perestroika” they decided to repair it but didn’t finish the works and abandoned it up to the 2000s when it was given to private hands. They have to pass through very narrow places here. We should open a heavy sealed door. These are the technical ficilities of the subway. It’s forbidden to photograph here in fact. A part of the bunker was repaired to hold various events here. It looks some Hollywood movie decoration about the Soviet time. This place could be occupied by a business center and a restaurant. IT specialists like the place for the entourage of a computer game and often arrange their events here. There was no internet or telephone connection on such a depth, probably it used to be more romantic. This is not photoshop, it’s how the tunnels really meet. A lot of generators used to make this place very noisy. We have to leave through the exhaust pipe. Some areas inside the bunker are flooded. The bunker used to be full of supersecret equipment. One can see how a mechanical cipher machine works. It’s a sectional model of the bunker. An artist Anna Redko depicted the bunker-42 this way.