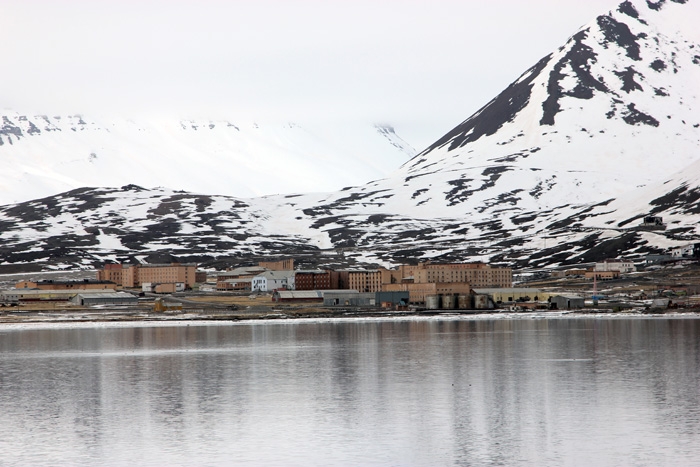 Three days by car to Oslo, three hours by plane toÂ Svalbard, Norway, five hours by an Arctic ship with a romantic name “Polar Girl” and you find yourself in the northernmost abandoned city: you are in Pyramiden. Today nobody lives here. Not a single citizen. The last people left the city more than fifteen years ago. It’s only 1000 km from here to the north Pole. It makes the cityÂ inaccessible for looters. So Pyramiden looks almost untouched and it is inhabited by white bears only.

The city was a Soviet enclave in the west, they built only houses of good quality according to Soviet standards. Those metal boxes on the windows are fridges.

Traditional fridges are not needed. In June temperature is not higher than 3-5 C (37-41F) above zero. Only moss grows onÂ Svalbard but people have specially brought here two barges of hardy grass that is able to strike root on the cold land. But it has not sprouted yet. It’s the place where the northenmost monument to Lenin is located. He is looking at the age old glacier. Most of the things have been untouched. Those flowers haven’t been watered for fifteen years. The poster says “To the West!”

People took only the most necessary things which they could transport by plane. Nobody swims in the northernmost pool of the world anymore. And nobody trains in the northernmost gym… The nature is wild and untouched. Maybe it’s how the world would like after a nuclear war?

24 thoughts on “The City Abandoned At the Worlds End”