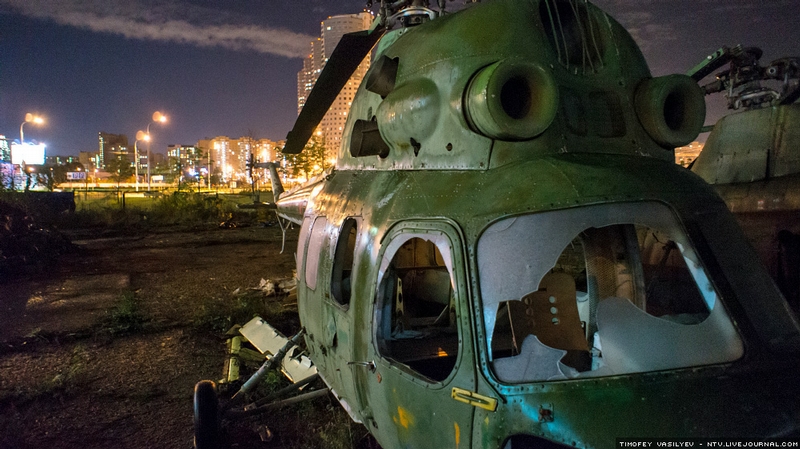 Right now they are demolishing the aircrafts on the field of Khodynka where they have been standing for many years as a part of the aviation museum exposition. Moscow citizens know this place well, they could come here, see various helicopters and fighters, even climb on them. Today, with no preliminary declaration of war, there came machines to demolish everything there. It says “Attention! The territory is guarded. No entry.” Though nearby is a hole one can get through. This mechanism resembles an excavator. But instead of a bucket it has huge hydraulic cutters. It has an inscription: “AviaVtorResusrs. Utilization of aerotechnics”. There is no doubt about its functions. Next to the machine we can notice a pile of metal scrap and ramins of a helicopter engine. This used to be a Mi-6 helicopter. Those very cutters to demolish the aerotechnics. Mi-6 helicopter is really huge, it can be compared with a two-storey house according to its dimensions. Have you ever sat on a helicopter blade? Blades of this helicopter are about 1 meter (3,3 ft) wide. It’s really cool. But nobody will be able to do it here anymore. It’s the entrance to the territory of the filed. They planned to create a museum of aerotechnics here but now all the metal is going to be remelted: giant combat machines will become a joy for some housekeepers who will buy new pans from waste. Here’s what has remained from the turbomotors. This light plane has lost a wing. This is some engine. The guards do not allow to come too close to the equipment. These ones still stand untouched but others standing next to the heliport are already demolished. Near this territory is an area of subway construction. The men say that the order to demolish the equipment belongs to the Ministry of Defence. It’s the official owner of all this. Swash plate of the Mi-26, the cutters haven’t been able to demolish it. The work has not stopped yet.

Next to a new metro station new buildings are going to rise, of course. What will appear next to them? Shopping centers! Museums will probably be the last what will come to their mind…