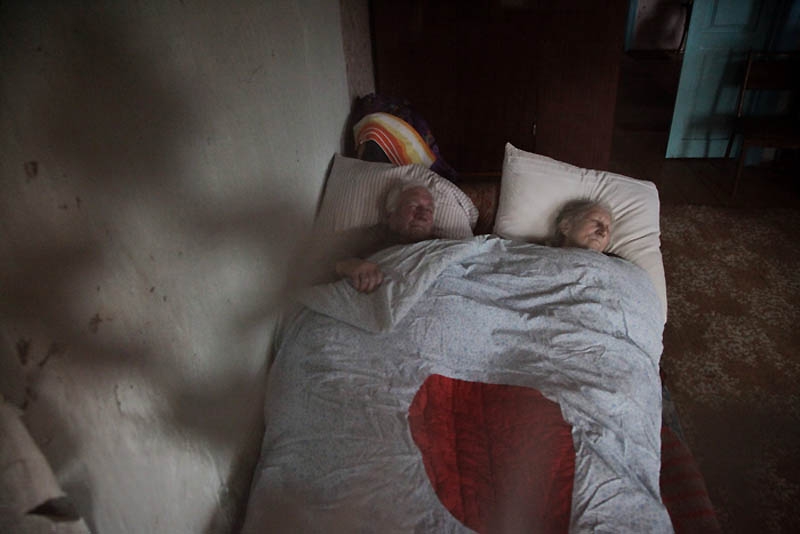 We’ve got used to the fact that all photos from Chernobyl, the ghost city of Ukraine, look abandoned.

A photojournalist Diana Markosian visited the place where in 1986 happened the terrible catastrophe. Many years after, the village called Redkovka, that is also a part of the exclusion zone, is still inhabited by people.

The village used to be big, today it is almost empty, only few families live there.

This story is about pensioners Lidia and Mikhail. Lidia, 74, and Mikhail, 73, live in Redkovka village where the radiation level is still exceeded. Lidia works in the field. Redkovka village was evacuated after the catastrophe at the Chernobyl nuclear plant. Five families refused to leave. Lidia is a former nurse. She was born in Redkovka and has always lived there. Today she is a pensioner. She gets about 120 USD monthly, and no extra allowance for living in such a place. Homemade food. Though after the explosion the villagers were prohibited to eat food from their gardens. Such a document was given to all residents of polluted zones. Mikhail was born in Redkovka too, married Lidia almost 50 years ago. He used to be the head of the local post-office. Rest after work in the field. Abandoned house of the village. About 1000 villagers left their houses after the catastrophe. Lida cries when remembers about the tragedy. “We understood our life would never be the same.” Nobody knows if they lived a better life in another place, what’s done is done… But they still have what they seemingly need most – each other.

9 thoughts on “The Two In the Ghost Place”