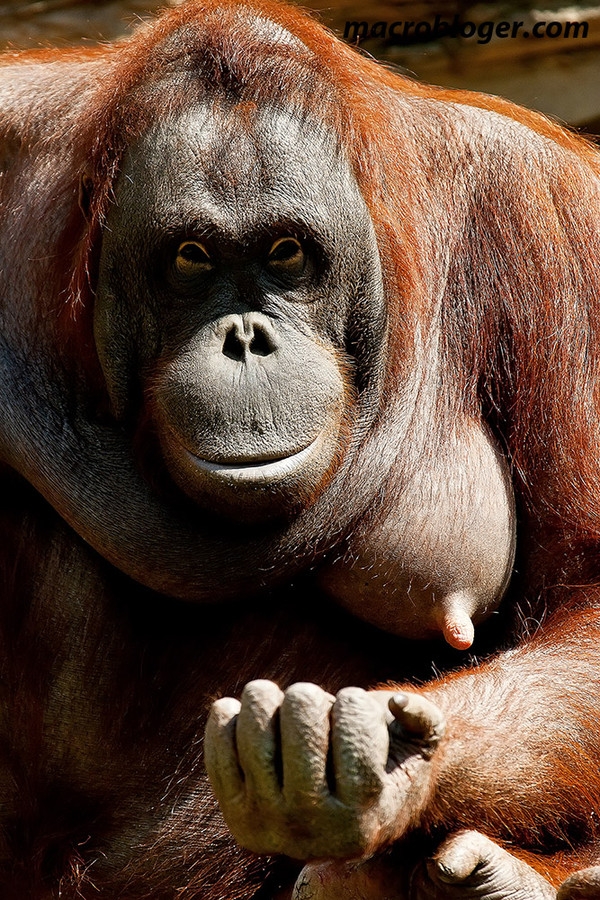 Orang Hutan is translated from Malay as a “forest man”. In the XVIII century they started to be brought from their native lands, Sumatra and Borneo, to Europe. Today their muzzles can be seen in Moscow too… What a serious guy!

Their hair is almost 0,5 m long! In fact they live in bog forests or on tree tops and do not like to come down…

These creatures are amazing and very cute. Such a parody of a human being!

Besides it is very interesting to watch how they behave and communicate with each other, how mom takes care of a son, how a couple can be in love.. Truly like people! Male and female orangutans meet in wild nature only for some time, to make “a marriage union”. A male produces various sounds – from quiet to loud – to attract a female. As opposed to other apes, orangutans live alone or in a couple. But sometimes it happens that two females with babies can live with one male forming such a family group. Territory of such a male orangutan occupies not more than 6 m2 where the group lives and eats. To be full they have to constantly search for food. But here, in the Zoo, a male can afford to get such a big paunch!

Babies grow and by the age of 7-8 they can become parents themselves. This is not mature yet But this one can be a parent soon But his mom is too serious! Looking at her it becomes clear why females are usually killed by poachers trying to catch the animals. No way she can give her child to anyone! P.S: We could hardly restrain from using black squares in this post!