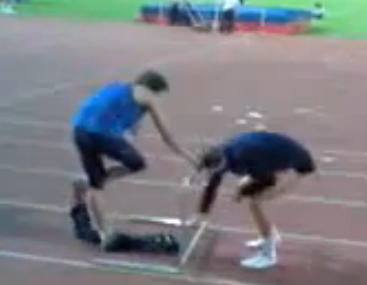 Some say that this was the only drunk athlete on the Olympic Games 2012 and that he was from Russia and blah blah blah. And they posted this funny video you can see below. No doubts he is drunk. Or not? Wait, he even’t can’t change his clothes by himself!

And his jump again:

Yeah, there should be no doubt that he is drunk! People drink all the time you know, how can a sober one behave like that! He might be nuts or what.

But then a sudden moment of truth emerges. What if I tell you that this guy won an Olympic gold metal minutes after his first “drunk jump”? And he made it with a stunning 5 cm (2 inches) difference to his closest counterparts, including a renowned American jumper who couldn’t even take his -5 cm height. Also there were three other athletes at -9 cm winning 3 bronze medals, which means that nobody on the Earth can even come close to the record result of a drunk Russian jumper. Or not drunk.

And yes his name is Ivan. Way to go, Ivan.

Shortly after the victory many reporters surrounded him and were asking different sport and non-sport related questions. Ivan was short in his answers and proved that his originality spreads far beyond the videos we’ve just seen. Some of the questions and answers:

Reporter: So, are you saying that you are not interested in sports at all?

Reporter: So you never log in to Internet to see how is your favorite soccer team is doing etc?

Ivan: I even don’t know the rules.

Reporter: Then what are you into?

Ivan: I used to like World of Warcraft a lot. Five years in a row was playing it all the time. Didn’t sleep at nights, was going to the raids etc. Was stopping only to go to train.