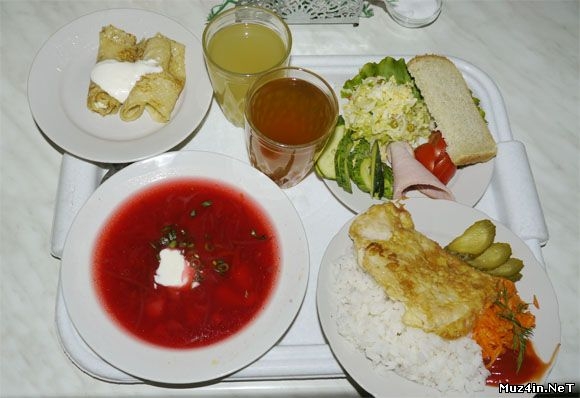 How do you think where such a nice meal can be served? We are not going to keep you in suspense long.

You may have such a tasty meal at the Chernobyl nuclear plant. For this you just should be employed to build a new protective dome over the nuclear plant reactors.

One Japanese reporter had a chance to try the food and he was simply delighted – so tasty it seemed to be. More than a fourth of a century has passed since the catastrophe of Chernobyl, today builders are working there in protective suits in hot weather and it’s really hard. But luckily they are served such a nice lunch in the best Ukrainian traditions. He liked the granish including the rice very mush too. According to him it was like a symphony of delicate tastes that resembled the Japanese cuisine. He also said that these pancakes were the most delicious he’d ever eaten! The reporter told that would be happy to come back to this remote place to only eat the Ukrainian food again.

This ordinary plain Chernobyl canteen seemed to be better than many restaurants.

Nice start for the new life of the ghost city!

6 thoughts on “Where Is This Meal Served?”