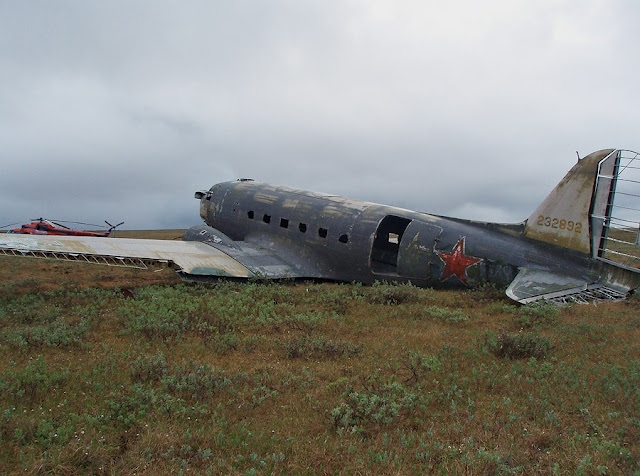 It seems to be a good year for the discovery of old forgotten airframes! There was the P-40 in Egypt earlier in the year, an IL-2 from a Russian lake last month, and now an intact C-47 ‘Dakota’ has been found in Siberia, in absolutely stunning condition! This lend-lease aircraft was found in the vast Taymyr Peninsula in Siberia. 65 years of exposure has stripped away a lot of the paint so you can see her original US markings on the fuselage. The left engine appears to have become detached after the plane made a successful landing, and the prop blades (visible in the shadows to the left of the picture) have been feathered, indicating the engine was not operational when she went down. The prop blades on the right engine appear undamaged, a good sign if the intention is to make her airworthy again. Detail of the right engine with the cowling missing, though said cowling is visible in the foreground of the picture at the start of the post. By the crushed nose it seems likely she nosed over upon making a forced landing at some speed. According to order number OK/071 of April 16th 1943 it was enlisted by the Office of Polar Aviation to conduct ice reconnaissance. From October 22nd to November 1th 1943 it explored the Kara Sea under the command of the pilot, MA Titlova.

From 3th June to 24th July 1944 it made further sorties from bases in Anderme for further reconnaissance of the Kara Sea. In 1945 it was sent to the Chukotka Polar Air Arm where it was given the number A-3072.

One book describes the final fate of this aircraft.

“Emergency, Saturday April 13th 1947 in the area of the river Dudypty, North of the village Volochanka. Failure of the left engine. Successfully made a landing and sat for around twenty days, until discovered by the crew of F. Shatrova. 28 people survives, some with minor frostbite on their hands and face (mostly children). Commander Tyuikov, airborne radio operator Smirnov and seven passengers were missing – they had gone in search of help in the snowy tundra and never returned.” Amazing that the Soviet red star is still visible on the fuselage after so many years out in the open! The landing gear has sunk firmly into the ground over the years. Hopefully the plane will be recovered and made airworthy again by a Russian museum.