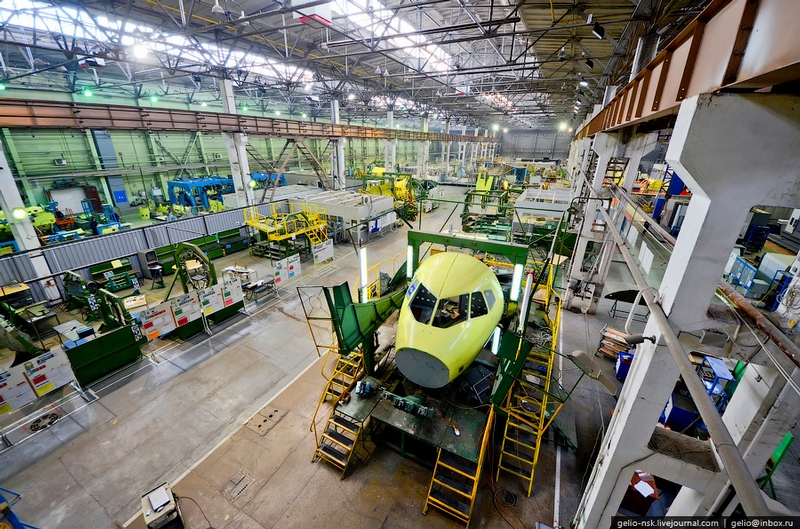 The Chkalov factory is one of the largest plane building enterprises in Russia, a part of the “Sukhoi” group of companies. Apart from the state defence order since 2004 the factory has been working on the project Sukhoi Superjet 100 (SSj-100) together with Russian and foreign partners. It produces nose and rear sections of main bodies, horizontal and vertical tails. In 2007 the factory began to introduce modern equipment for mechanical processing of Sukhoi Superjet 100 details. Each component has its place… Preparing for the mechanical work. After the processing this metal plate will turn into a panel of a liner. The metal is put into the processing centre Handtmann. Ready panel can be used for assembly. Despite the automation of many production processes, good assemblers are still in high demand. Riveting of the liner cabin Assembly of the fuselage rear. Final assembly of the nose tail Operators of the processing centre Components are to be painted In 2008 the factory launched the program of lean production, this experience was adopted from such industrial giants as Toyota and Boeing. Sukhoi Superjet 100 — a Russian short-haul air liner. Planes of Sukhoi SuperJet-100 group are intended for the flying range up to 4400 km. The first flight of the prototype was performed in May, 2008, the plane was put into service in April, 2011.

7 thoughts on “Production of Sukhoi Superjet 100”