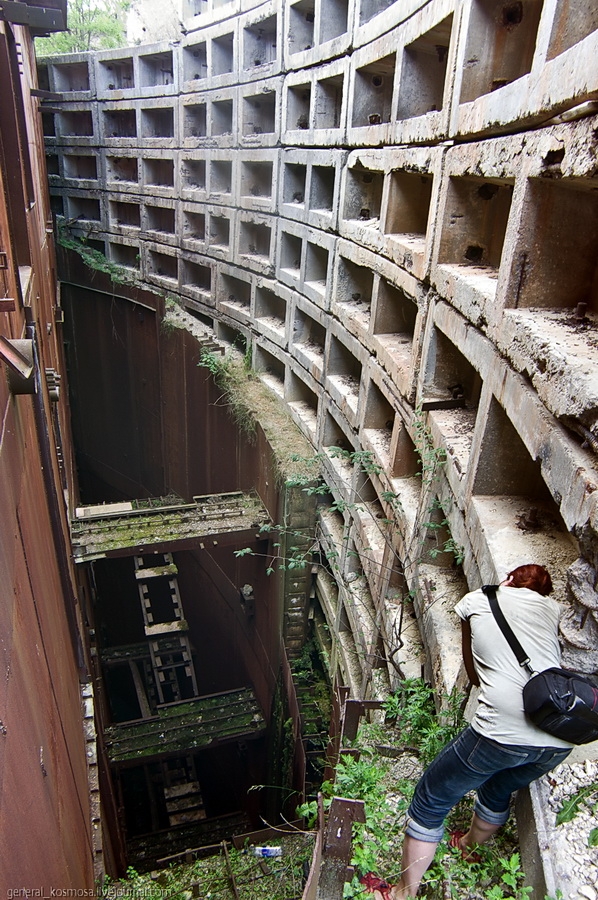 This is one of the alernate command posts of the Warsaw Pact contries located on the territory of Moldavia. There are similar constructions in Belorus, Ukraine, Russia, Azerbaijan.

Object 1180 represents two cylindrical blocks each 36 m in diameter and 60 m deep divided into 10-12 levels. There is an additional level used as a fridge centre.

The bunker was not finished and finally was abandoned, but the structure is so colossal that is truly worth visiting. It’s hard to imagine how deep everything is buried here. Both blocks of the bunker are interconnected by a communication postern. Hundreds of pipes and cables stretch through it and support the command post. Entrance to the postern from the upper level of the bunker. It’s easy to get into the command post through the upper level. But in darkness one should be careful! Looters have taken many things away. The staircase between the levels of the command block have also suffered looting. Ice is still floating there It would be nice for Indiana Jones movies… Typical storey of the command block has two big rooms and a corridor between them. The rooms are 4-5 m high. The walls are made of steel. The next block, its bunker has been preserved better. There are few unfinished structures and cooling installations there. Lower than the sixth level the bunker is flooded, at the water surface is the ice layer 40 cm thick. Exit to the communication postern between the blocks, its length is 20 meters. It’s fully from metal. Cover of the bunker 20 thoughts on “In the Huge Abandoned Bunker”