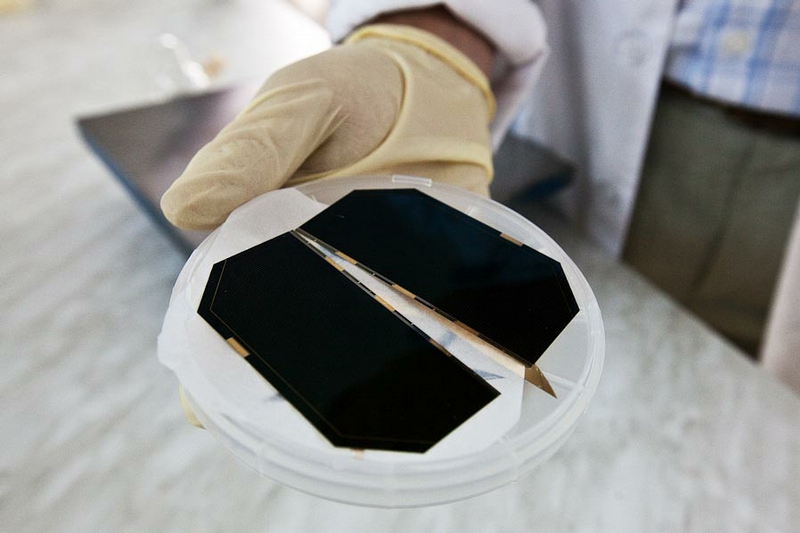 These are photoelectric converters – solid-state devices converting solar energy into the flow of direct current. Simply stated, these are solar batteries. Artificial Earth satellites work at space orbits with help of such panels. They are produced in Krasnodar – at the “Saturn” factory. “Saturn” is one of the two leaders at the Russian market making solar and storage batteries for the needs of the space industry – military and civil ones. All profit of the enterprise remains in Krasnodar for development of the production facilities. Everything starts here. There is a gas reactor in this room inside of which they grow a crystal layer that will serve as the basis of the future photocell. Such a device costs about 3 million euros. Electric contacts will be applied to both sides of the photocell. More than 20 technological operations are made on various apparatuses before the photocell becomes the basis of the solar panel. Mask aligner. “Patterns” of the electric contacts are formed here on the photocells. The machine operates automatically. Electric contacts and dielectrics are applied with an electronic beam in the vacuum eveporator. Also antireflective coating is applied (it increases current produced by a photocell for 30%). The photocell is ready and now the solar battery can be assembled.

The photocell is covered with the protective glass, under the conditions of radiation in space the photocell would not withstand the load without it, though it is only 0,12 mm thick the battery will serve for more than 15 years with such photocells. Photocells are connected with silver contacts which are only 0,02 mm thick. To get the required voltage of the solar battery photocells are connected sequentially. At last the solar panel is assembled. This is only a part of the solar panel – the model of the panel. There should be up to eight panels like this at a satellite depending on what power is required. At modern satellites it reaches 10 kW. Such panels will be mounted on a satellite, in space they will open like wings and people will be able to watch satellite TV, use the satellite internet and navigation systems. When a spacecraft is lit up with the sun, the energy produced by a solar battery feeds the systems of the spacecraft and the excess energy accumulates in the storage battery to be used when the spacecraft is in the shadow of the Earth. Nickel-hydrogen batteries are highly powerful and inexhaustible, they are widely used for spacecrafts. Production of such batteries – another business line of the “Saturn” enterprise. Machine for electron-beam bonding in the vacuum. It helps to make the frames of batteries from thin metal. Here parts and frames of batteries are tested for high pressure. Frames of the nickel-hydrogen batteries are very important details of the whole device working in space. The checked batteries are filled with electrolyte and hydrogen and then they are ready for work. Frame of a nickel-hydrogen battery is made from special metal alloy – solid, light and with high thermal conductivity. Storage batteries undergo electric tests with help of the machines produced here by the enterprise. Nothing can be changed in space so everything has to be carefully checked here. 5 thoughts on “Production of Solar Panels For Space”