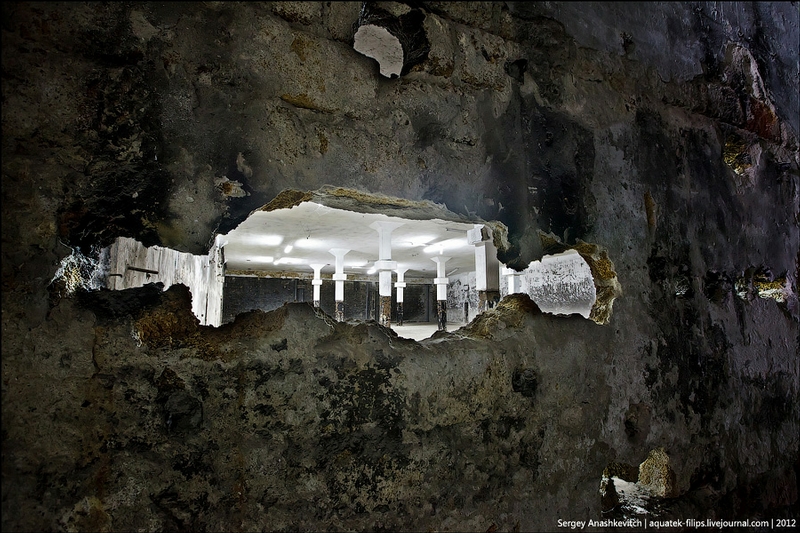 We are in the largest Crimean fridge built and put into service back in May 1928. It’s the quitest place in the Sevastopol bay, in the very centre of the city. The place if often called “a tsar’s pier”, Nikolay II came here with his family to pray in a little local church. But let’s go back to the unusual building. It’s not so big but during the war it was one of the most powerful in the country. Its capacity was 15 thousand centners of various cargoes. That’s why the building is close to any traffic lanes. Food was delivered here by cars, railway and ships. The basements and the walls look the way it was during the war. During the Sevastopol defence here stood Soviet combat ships firing the German positions. On the photo above is a fleet destroyer “Svobodny”, moored at the fridge building. After heavy bombing of Sevastopol this building was one of the few that remained whole. Some believe that the Germans even kept prisoners in its halls. But this information is not reliable. On the photo above – May, 1944. First days after the liberation of Sevastopol. The building has 4 storeys, this is the basement These doors on each store lead to former stock rooms for food brought to the city. After the wa the building was partially restored and continued to function since 1949 as the city fridge. The building had two elevator shafts that supported two machine rooms on the 4th floor. Straw in the walls The building was bought out and is secured now, so it doesn’t look like a toilet for the homeless and teenagers. After being in this old building for several hours it’s strange to come out and see modern yachts, cars, traffic jams and sunlight… Once the very mysterious building will turn into the ultra modern sea-piece under the paints and plaster of restorers.

2 thoughts on “In a Big Big Old Fridge”