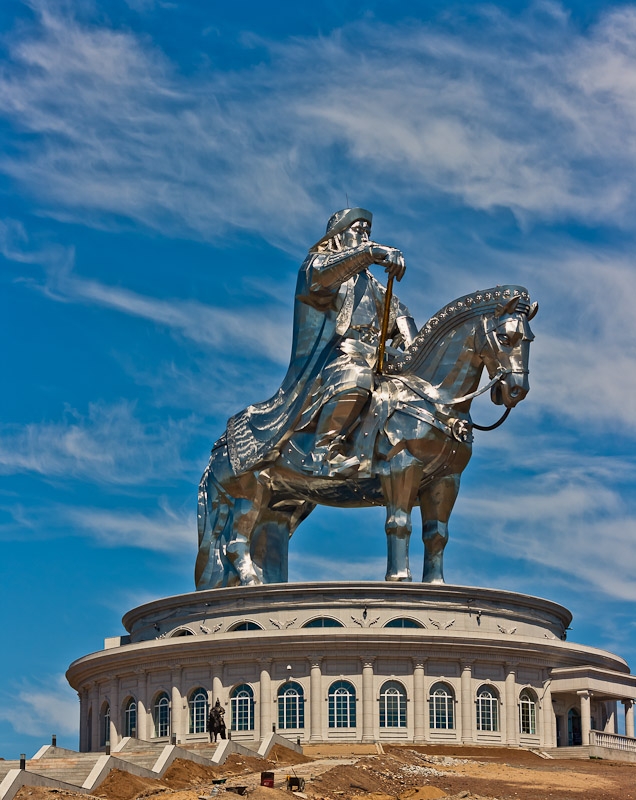 Horse statue of Genghis Khan is a symbol of 800-years anniversary of Mongolia.

Many historians believe that the greatest invader of all times was not Alexander the Great but Genghis Khan. Alexander inherited the strong army and the powerful state from his father while the freat Mongol started all from null, he united desolated steppe tribes and for 21 years of his governing (1206-1227) he created the huge state that occupied 22% of all the terrestrial territory. His name awed many peoples of Eurasia, but for Mongols the great khan was and is father of the nation.

Despite all the respect to Genghis Khan Mongolia does not have many places where tourists may learn the story of the legendary leader. But today, after all these 800 years, he is back ahorse!

The huge 40 meters statue covered with 250 tons of stainless steel towers over the plateau. The great Mongol is erected on a 10 m pedestal and is surrounded by 36 columns symbolizing 36 khans who ruled the country after him. The horse statue was solemnly opened on the 26th of September, 2008. Statue of Genghis Khan is a tourist centre of Mongolia. It’s not just a monument but also a two-storey tourist complex. Inside is a museum, a gianе map of the khan’s invasions, an art gallery, a conference hall, restaurants, a poolroom and a souvenir shop.

The horse head is 30 meters high, from there one may observe awesome views of the endless Mongolian steppe. They plan to build a theme park around the statue. It will be devoted to the Mongolian way of life of the Genghis Khan epoch. The park will consist of 6 sections: camp of warriors, camp of craftsmen, shaman nomad camp, khan’s jurt, cattle-breeder nomad camp and educational camp.

There will be a camping site consisting of 200 jurts, a swimming pool, an open air theater and a golf field on the complex territory enclosed by the stone wall. Besides, the steel monument will be covered with gold in order it is better seen in the steppe. They will plant 100 000 trees. This place, 50km from Ulan Bator, was not randomly chosen, according to the legend it was the very place where the young man Temujin found a gilded whip that helped him to become Genghis Khan and invade half of the world. The total area of the cultural-historical complex is 212 hectares.