Let’s see what is happening to the notorius ship “Bulgaria” today.

Bulgaria was a class 785/OL800 Russian river cruise ship (built in Komárno, Czechoslovakia) which operated in the Volga-Don basin. On 10 July 2011, Bulgaria sank in the Kuybyshev Reservoir of the Volga River near Syukeyevo, Kamsko-Ustyinsky District, Tatarstan, Russia,with 201 passengers and crew aboard when sailing from the town of Bolgar to the regional capital, Kazan. The catastrophe led to 122 confirmed deaths (bodies recovered and identified).

The sinking of Bulgaria is the largest Russian ship disaster since 1986 when the SS Admiral Nakhimov crashed into a cargo ship and 423 people died. (wiki) Restaurant of the main deck. On the left is the bar counter, behind it is a small door leading to the deck. On the lower deck 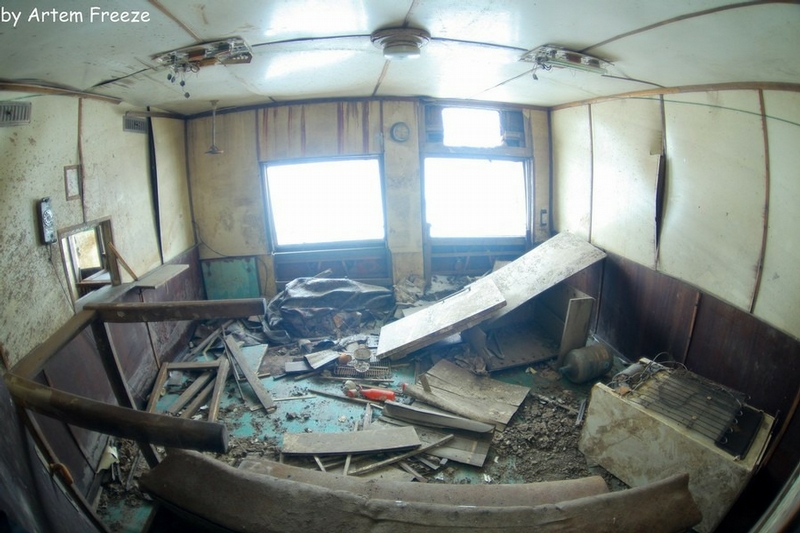 Kitchen where the crew ate Most of the ship items and walls are soiled with machine oil, there are still some food and perfume smells.

The ladder goes to the hold where the staff cabins are. One of the cabins One of the four ladders leading to the main deck The lower deck. The corridor with cabins and further on is the restaurant. Many people can see human silhouettes on the photo above. One of the cabins of the lower deck

3 thoughts on “Life After the Shipwreck”