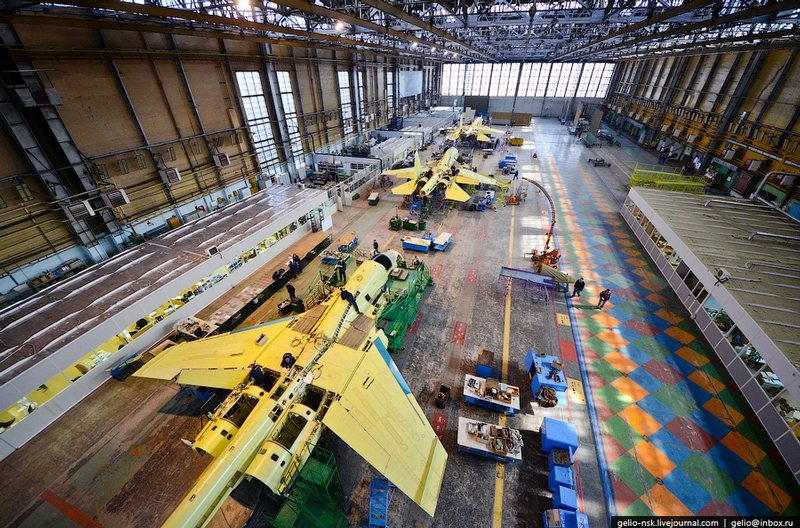 Novosibirsk aeronautic production association named after V. P. Chkalov (Chkalov plant) is one of the largest plane making enterprises of Russia that is a part of “Sukhoi” company. In the beginning of the 90s the plant began to master multi-purpose aviation complex Su-34. The first plane took off in 1993. Since 2006 they have started series delivery of these vehicles to the Russian air military forces. Su-34 is capable to accelerate its speed up to 1,9 thousand kilometers an hour and perform flights at a distance up to 4000 km. Combat radius of the vehicle is 1,1 thousand kilometers.
The strike aircraft is armed with a 30-mm gun and has 12 mounting points for attachments with total mass of 8 tonnes. Western analysts still cannot classify this plane. It is called “a multifunctional fighter” or “a bomber-fighter”. The aviation equipment is made by 6000 workers and specialists. Their average age is 25-40 years old. When the fuselage is ready it’s turn of mounters to work. In their hands vehicles turn into living organisms. Many processes are fulfilled exceptionally by program products. The plane was used for covering actions of striking aviation by carrying out radioelectronic combat with Georgian air defence systems. By the end of 2020 the plant should supply 92 planes to the Russian air military forces.

10 thoughts on “Production of Su-34 In Novosibirsk”