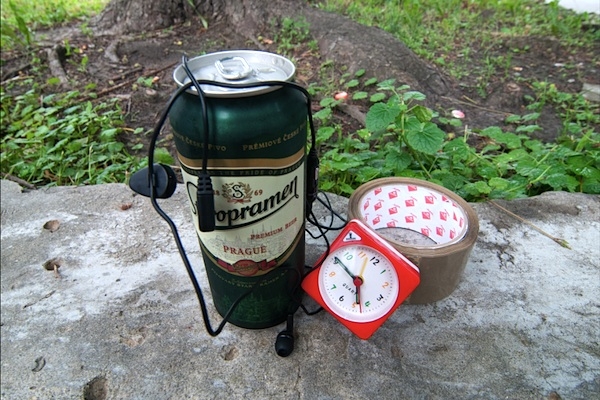 2 days before the first match of EURO some guys decided to check if the security service of the fun zone in Kiev is well prepared for it. Everyone who wants to enter the fun zone must be checked. Alcohol, big cameras and bags, weapons, petards and … umbrellas are not allowed to bring in.

Though these rules did not prevent the guys from bringing in a fake bomb. It had been made from a beer can, an alarm-clock, batteries, sticky tape and a telephone headset. Freely enetering with the bomb in the rucksack. The guys are only asked to open the rucksack and show what’s inside. The bomb is under papers and a cap. The bomb posing in the toilet Posing on the parapet at one of the entries to the fun zone. Posing in the trash bin. By the way, after the explosion in Dnepropetrovsk where a real bomb had  been put into a trash bin, amost all trash bins were removed from the streets of Kiev and other cities.

But nobody pays attention to the bomb. Walking in the fun zone with the bomb…

8 thoughts on “Bomb In the Fun Zone”