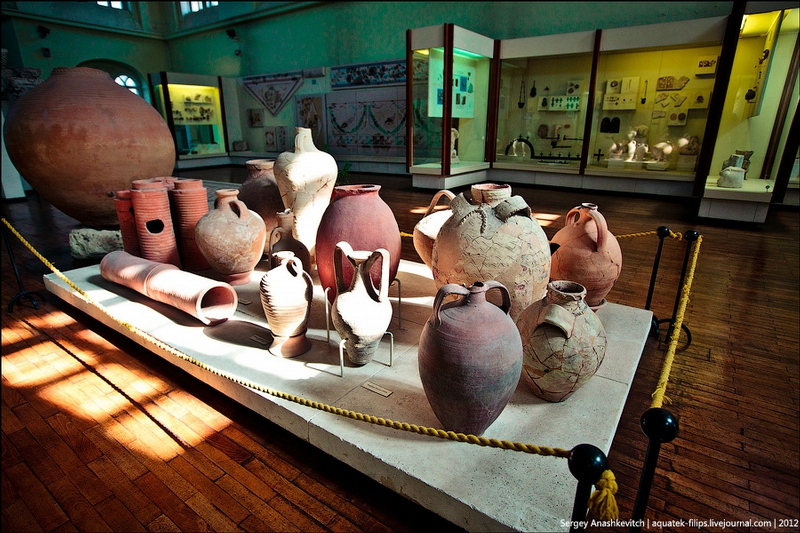 Wine epoch started in the Crimea with arrival of the Greeks. To get more information about the history of the Crimean wine-making it’s nice to visit the Chersonese museum. Nowadays it is credibly known that wine-making in the Chersonese appeared in the first half of the 4th century BC. The climate of Greece was much softer than the Crimean one. And the local winds were also unexpected for the Greeks. We can suppose that they hybridized the Greek kinds of grapes with the Crimean ones, more cold-resistant. Vineyards were probably created on terraces protected from the winds. Names of the wines made in the Chersonese are unknown. There were raisin wine, aged wine, yellow (aged white) wine, and honey one. Young wine was cheaper than the aged one that was mainly exported. It must be noticed that technology of wine-making hasn’t changed much (if we mean real wine-making – without spirit, colouring agents, aromatizers etc). The rich and the poor drank wine. But women didn’t. They could drink it only if they were ill. Men, on the contrary, drank too much, the smallest goblet was of 500 ml. And the wine was not always diluted with water… The main wine feast in the ancient Chersonese took place in spring: they drank the wine of the previous year. Wine was a drink for holidays, remedy, business and a part of religion – the cult. The state would not exist without wine and pottery. But everything could be destroyed by war. The war destroyed the prospering civilized state and deprived the Crimea of the good wine-making traditions for the long centuries. And today people try to find out the historic truth with help of excavated findings. Sometimes they demand restoration. Here jars can have their original condition back. Sometimes some fragments are missing and the restorators create them themselves. Marking of the restored jar Attic ceramics appeared in the region in about the middle of the VI century BC. Attic black lacquer was of high quality, looked very glossy. It was well preserved on ancient jars. Kylix – an ancient vessel on a short stem. Amphorette was used for aromatic oils and cosmetics storage. 1 thought on “Silent Artefacts of the Crimean Wine-Making”