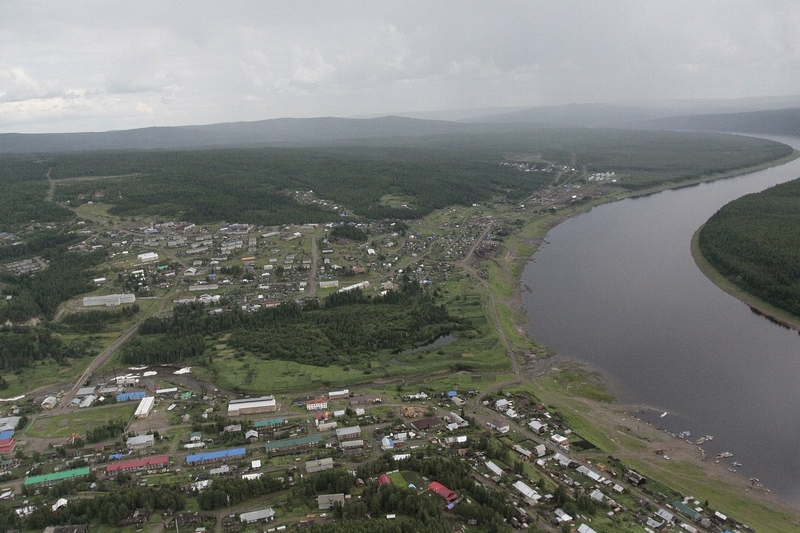 Vanavara is a lonely place somewhere on the boundless territory of Evenkiya.

Mainly sad news have come from there lately: a boiler room exploded, tap water smells with gasoline or something… But there were times when the Krasnoyarsk region was even proud of it! That’s how the biggest sawmill of the settlement looks like today. Snow in the end of May is normal here. 1 litre of milk or juice costs here about 3,3 USD, 1 kg of sausage is twice more expensive than in Krasnoyarsk. Fruits are almost impossible to find, despite sky-high prices they are bought at once.

Some houses are abandoned, nobody repairs them and they often become a reason of fires. Gasoline is more than 1 dollar per litre. Cars can reach the village only in winter. Spring, summer and fall are the seasons when only planes can reach it. At that a ticket costs almost the same as a ticket from Krasnoyarsk to Moscow – 400 USD.

Boats are at every house, they are used for fishing. Central street of the settlement

When Vanavara was a large aviation node planes and helicopters flew from here to different settlements and pastures of reindeer breeders, from here started expeditions looking for Siberian meteorite, oil and gas. Taking part in such an expedition was a nice deal: good salary, long vacations, nice retired pay… People from all over the country came to Vanavara. In the end of the 80s it started to decline, those who didn’t manage to go to expeditions were “buried” under the ruins of the USSR in a little northern settlement. The hardest time for the settlement was 1992-94, some families ate mixed fodder. People had no cash at all, they just tried to escape. Hunting and fishing let them survive somehow.

Most of those who live here today are unemployed. Former grocery. When it worked food was cheaper. Here was a fur farm and local zoologists annually gave more than a thousand of black brown fox skins. In the 90s it turned out that keeping foxes was not profitable and the enterprise decayed too. “Vanavarenergo” – the main employer in the settlement. 10% of local population (300 people) work in it. Reservoir with oil that somehow appears in the tap water of the settlement. Men go hunting, it’s the main source of income for men. In a lucky year one may kill up to 150 sables. Each skin costs more than 100 dollars. Hunters are often older than 70. There are no stray dogs here, they all live in houses and are used for hunting. The same children celebrate an Evenk holiday in the local library

Even such life they got used to is at threat now. The first blow was unification with the Krasnoyarsk region. Instead of the promised good Evenkiya got only more problems.

Now to solve any problem and get any document people have to fly to Tura, which is not cheap, of course. This weather station is one of the oldest in the region. Inside. The equipment is more than 40 years. The weather balloon is let in the air each morning.

There are only two deputies representing Evenkiya in the legeslative assembly, nobody listens to them, of course. They themselves come here only before elections… Workers of the weather station have been to Antarctica. Only women work at the weather station.

New laws concerning fishing and hunting made the people’s life even more complicated. Now they cannot fish with nets, but nobody has ever done it in any other way here. So they all became poachers. The same situation is with hunting: if you have a hunting lot you have to dike it all around. Can you imagine an ordinary person excavating a trench for hundreds of kilometers? Such distance is normal for Evenkiya. There are many leaflets with complaints and demands to secede from the region.