Omsk has always been a military city. Founded in the 18th century as a border fortress it became the biggest centre of the defence industry of the USSR in the 20th century, the city of military units and army institutions. No wonder that there are real tanks and self-propelled units on many playgrounds.

The tanks were welded up and placed on playgrounds. Planes were there too, but people contrived to disassemble them.. Such a toy costs about 1 million dollars. 1000 of tanks – 1 billion dollars. One billion of dollars on children’s playgrounds! Can you imagine that? 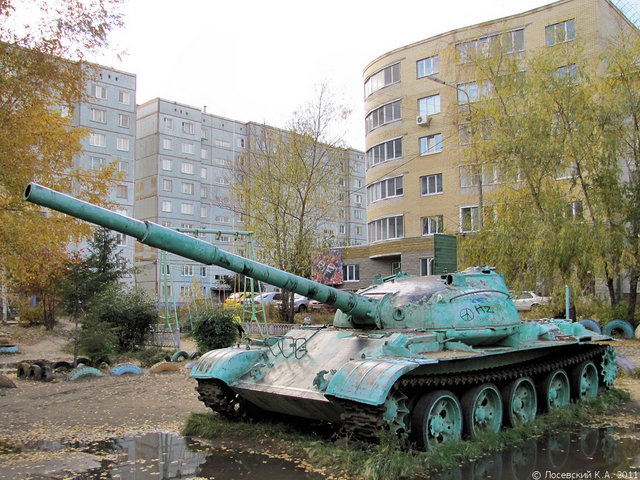 The most famous playground tank of Omsk – T-62. It used to be in the company of L-410 plane and a vessel on submerged wings “Raketa”. But only the tank remained.

A medium tank T-62 that was put into service in 1961 and was produced till 1973 undergoing various upgrades.

In general 20 000 of T-62 units of different modifications were made. Т-62 participated in bringing the troops to the Czech Republic in 1968. However during the conflict with China on Damansky island its operation was not successful. The Chinese managed to disable and capture one T-62. The battle history of this tank also included Afghanistan, Chechnya, South Ossetia… This one has a normal tank color. This one still has clearance lights. This one looks like a toy but it’s not. Commander’s hatch is more than real.. Remains of the turret and gun drives, vision and control devices. This object is nothing but a training simulator of the tank that was used for teaching students. On the photo above – remains of a 115mm smoothbore cannon 2A20. What could be dismantled was dismantled. It was used to provide anti-tank defence of air landing troops units and to follow motorized infantry and tank units. The weapon was produced from 1959 till 1964. The vehicle had serious defects and was finally phased out. The first ASU-85 vehicles had open towers on top but since 1960 they started to mount roofs with four hatches and a filter installation for higher crew protection. ASU-85 was in service through 1993. One more armed object, but it’s not in Omsk but in Chernoluchye village. T-34-85 has been recently painted and looks much better now.