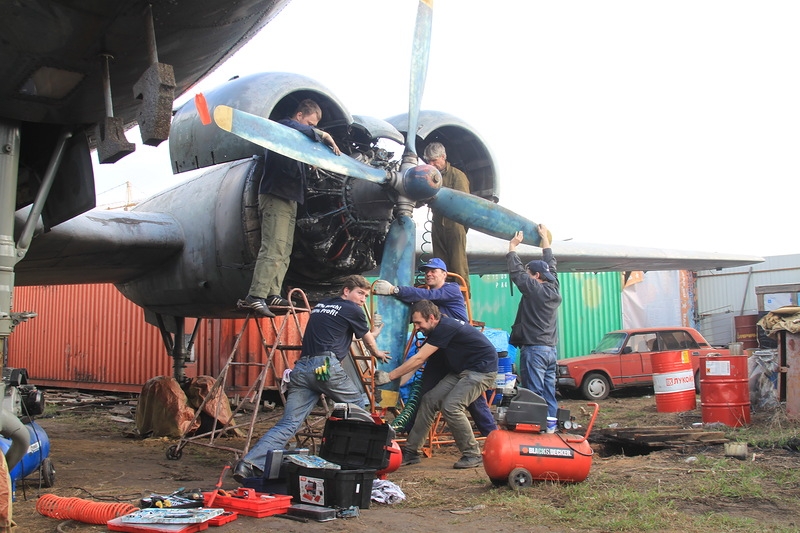 While restoring and returning 2 units of IL-14T to heaven you realize that planes have souls too. If you treat it as a friend you have a friend’s response. It tries to help, shows itself from a better side. Even “an ill” plane tries to keep its spirits up willing to show it can still be useful and shouldn’t be discarded… The left engine of “Blue Dream” lacked 100 revolutions, produced some vibration,  non-typical metal sounds, supercharge did not correspond with revolutions. So the guys were trying to find the reason and fix it.

Measuring compression on the left engine Measuring compression on all cylinders with an American compressometer. One cylinder didn’t have compression at all! The piston and the piston-rod fragment Mounting seat of the cylinder

It became clear that the piston rod was broken long ago. It lacked a fragment of about 10 cm… The engine had been working in such a state for long spoiling other cylinders, counterweights, pistons…

Yes, this engine was made for the war! Fighters La-5FN with similar engines managed to fly with one destroyed cylinder being hit with a shell. The reason of the breakage was a hydraulic shock. The left engine had to be replaced. The broken one could be a donor.

The airscrew is to be dismantled first. Twisting the blades off, each weighs 30 kg Disassembling the screw AV-50 and making a special tool. Part of the power cylinder Corrosion on the elements of the rotorhead The main nut, it fixes the airscrew…