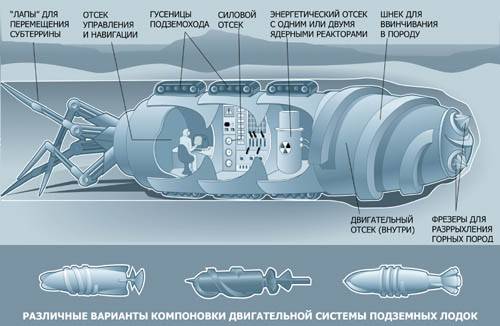 The subterranean nuclear combat boat was probably the most fabulous secret military project of the USSR.

They had been dreaming of creating a subterranean combat vehicle for long, similar projects were in Germany too. In 1934 a German genius Ritter made a project of a vehicle moving on land, underground and even underwater 100 m deep and deliver a huge amount of explosives under Mazhino line. Another inventor V. fon Vern patented his model of a subterrain vehicle. He promised to make a vehicle for 5 persons capable to move underground with speed of 7 km/h and carry 300 kg of military load. However the project was closed in the beginning of WWII. None of these wonder machines came out beyond the drafts.

When Wehrmacht was defeated the documents came to the USSR. On their basis in the time of N. Khruschev Soviets finally created an acting model of a subterranean boat. During its first test in the Urals the boat sailed along the mountain with a speed of a pedestrian. During the second test the boat exploded and turned to be immured together with the crew in the mountains. In the time of Brezhnev having understood all foolishness and mercilessness of the project it was eventually cancelled.

Some facts: the subterranean boat had a titanium body with a nibbed nose and stern 3,8 m in diameter and 35 m in length.
The crew consisted of 5 persons. Besides it could take 15 persons more and a tonne of explosives aboard. The “Mole” under the mountain “Bagodat” “Combat mole” – a mole was a prototype for the boat… 8 thoughts on “The Craziest Secret Military Project of the USSR”