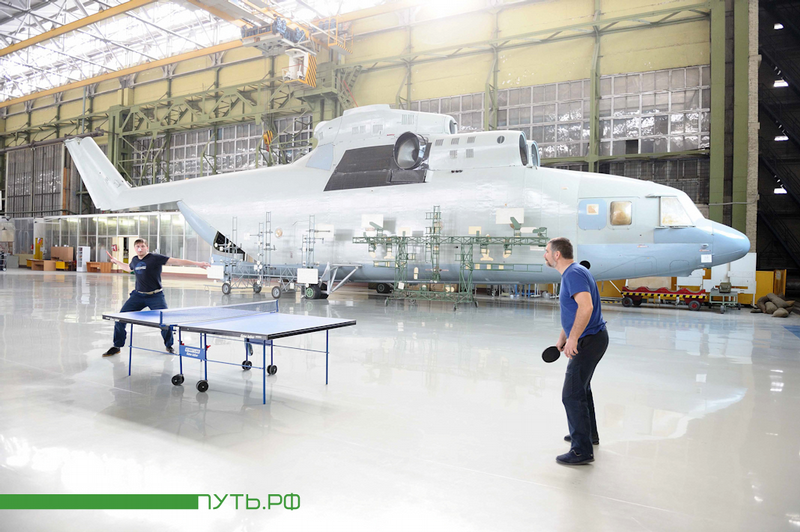 What vehicle can lift up a couple of tanks or a 7 tonned transmission equipment in the air? Not only a launch vehicle “Proton-M” is capable of this, but also a Russian helicopter
“Mi-26” – the largest of such class! This flying warehouse is produced in Rostov-on-Don, at “Rostvertol” factory. They say that those who once entered the military enterprise are not allowed abroad then… “Rostvertol” has been working since the 1940s. They say that at that time they produced helicopters from wood!!!   Military men were afraid of flying on huge logs…

On the photo above is a shop where they assemble Mi-26. Cargo up to 20 tons can be loaded in it. Americans make an analogue but it can lift only 1,5 times less. You think it’s a shop? No! It’s a cabin. It may accomodate another helicopter, for example a three tonned Ka-226. And one KamAz. And a tank can be hung on the frame. In order workers caould get close to such a giant they need real construction scaffolding. The helicopter height is more than 8 m which is comparable with a 3-storey building. Here a strike helicopter Mi-28 is produced. It is intended to destroy tanks in bloodbath conditions. Such vehicle can make a loop or a rolling. It is often called “a night hunter”. They maintain high quality of the products appreciated in the whole world. They not only assemble helicopters but also provide service maintenance. Siberian “SKOL” being repaired. Soon newly made attack helicopters will go to defend the country.  The military forces have already been provided with new Mi-28N, Mi-35M, Mi-26. 18 thoughts on “How Helicopters Are Assembled”