This book was found by someone on old upper shelves… And it deserves some attention, we guess. The family described is quite unusual. He was born on 2nd of April, 1970 and was a weak cub. But the family gave so much care to him that at the age of 2 he already weighed 200 kg and was 3 m tall. He was named King but the kids used to call him Tosik. The adults also called him Simba. Then he became a beautiful and tame lion’s whelp. Everyone in the family loved him and took care of him. Roma liked to set his hair while King liked Roma to do this. He was a full member in the family. Mornings started from exercises. Only Eva used to shirk them. She preferred to go on the swings and sing songs. King let her swing, he had his own apparatuses for training. Once they went to a park to have some fun. 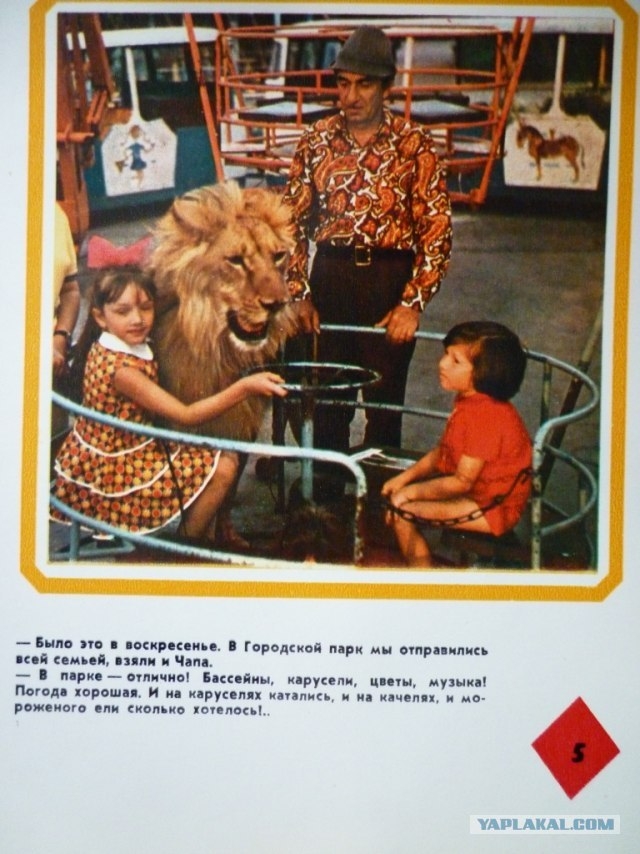 It was Sunday. All the family went to the park. Nice weather, swimming pools, carousels, flowers and music, much ice-cream… … Probably too much of it, so much that King got ill: high temperature, cough and pain in the throat… They gave him a blanket and medicines. Sometimes he had motorcycle rides but he didn’t like it much: dirt, dust and noise… Roma used to cheer him up saying “Speed, courage, cosmonautics!” When they came to the seashore for the first time he wanted badly to swim with others. But he was still considered to be small and the family didn’t want to risk. He tried not to look at those happy people in the water… Then he grew up and was explained how to swim. He liked the sea so much! They drank sweet water after the salty sea one. He used to see blue dreams. Maybe he saw seas, maybe it was just the blue blanket with white flowers resembling clouds… He had another friend in the family, a hedgehog Dimka. They looked different but were soulmates. Sometimes they had guests: Lady and Black. They were nice guys with good manners. Sometimes father and mother went to a theater or to visit somebody. They all played football. In evenings they watched TV or read books. King liked to watch cartoons very much. He was dreaming to become an actor and once he did!

15 thoughts on “Being Guests In The Berkovs Family”