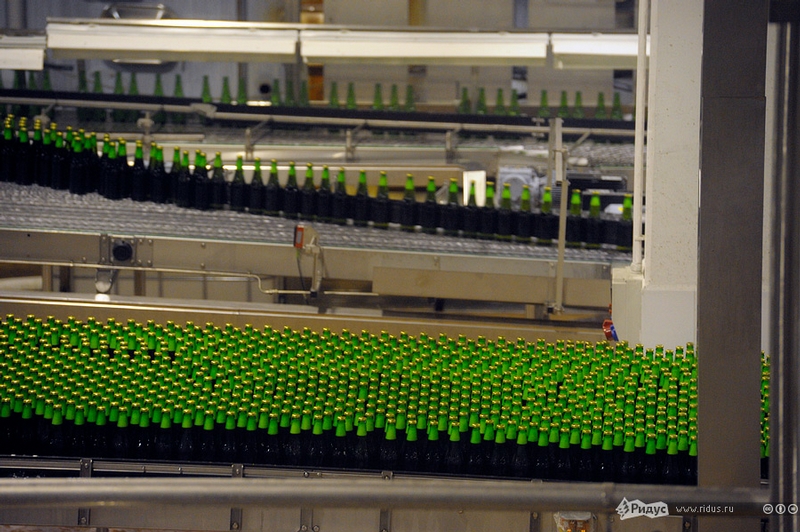 This is the Moscow Brewing Company that produces so popular in Russia beer “Zhigulevskoye”. Products of the company The company is located Mytischi, the Moscow Region. And its plant is not so big. Pure water for the production is taken from the Mytischino water supply system, one of the oldest in Russia. The water is carefully purified first and then distilled. The distilled water is not tasty so it goes through special systems where various minerals and other useful things are substances to it.

They have some tanks with several kinds of malt (standard, light and dark) and hops. Thus they accentuate the German beer fact that beer should consist only of three components: water, hop and malt. The malt they use is produced only in Russia, but hop is bought in the Czech Republic and Germany. It is very noisy in the shop. No many workers can be seen here, the process is automated. Only 4 men control it.

Malt is grained and combined with water in huge tuns hidden in the depths of the plant. The resulting liquid goes through the special system of pipes and filters and then they separate the wort from which they will boil beer then. Then hops are added to the wort in order beer could turn into alcoholic drink and obtain its inimitable slightly bitter taste.The hopped wort is boiled in special cylinders. Then through the system of pipes and pumps the boiled mass goes to the fermentation room. It is very cold there. The lab. Here they define if beer is suitable for drinking. The process of yeast assimilation is the longest. It takes from 1 week to 1 month. Beer strength, taste, color and other characteristics depend on it. But before coming here the beer must be tasted. It’s not a simple work, you know, you have to drink beer at 10 am. And all day long. Not only beer, though, but also juice and other products of the plant. Here, with help of expensive equipment (that costs half of a Moscow flat) beer is checked for various admixtures, its components are examined. Only then the fresh drink will fill bottles and cans. Plastic bottles are also produced by this company. Aluminium cans are brought ready and painted. Before being filled with beer, each bottle goes through a so-called “inspector”. It’s a special machine that with murderous intensity photographs each bottle in three positions: aside, from above and from below. It’s done to prevent cracks on glass and other defects. Such bottles are broken in the nearest container with trash. After filling goes plugging. And another “inspector” that checks amount of beer in a bottle, tightness of a cap and accuracy of a sticker position. All defective bottles are also broken. Caps on a magnet Bar at the plant

4 thoughts on “Specifics of National Brewing”