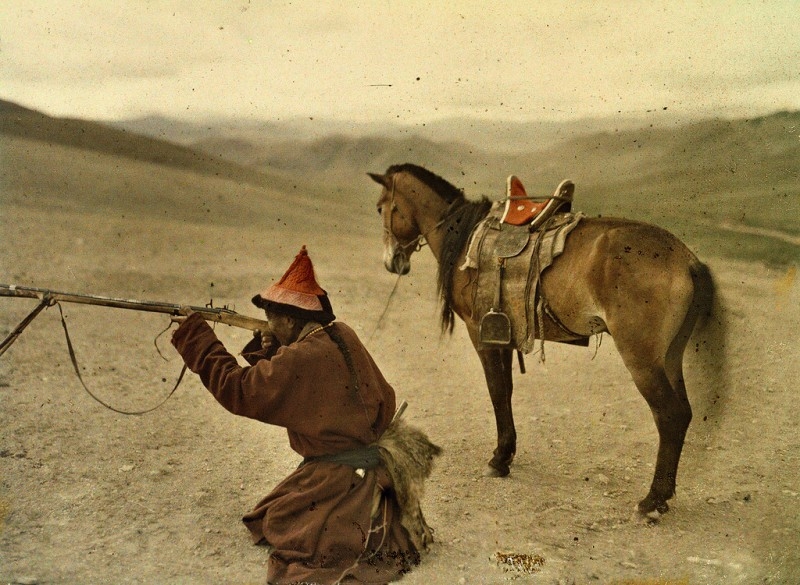 These are the photos from a big photo collection of Albert Kahn devoted to Mongolia visited by a photographer Stefan Passe in 1913.

Mongolia declared independence from China in 1911. It was under protectorate of the Russian Empire at the time of Passe’s journey, with full autonomy and own theocratic leaders. But, after only 1 year of protectorate, Russian Empire recognized suzerainty of China over Mongolia. The country from the point of view of a civilized European was a shocking feodalic reservation. National Geographic magazine published this shot with a description: “A Mongolian woman sentenced to starvation death”, though this box could be used just as a portable prison popular among nomadic people. “Two Cossack soldiers in Urga, 1913” – representatives of a minor contingent as the symbol of the Russian protectorate. Probably the best photo – a hunter in vicinity of Urga, 1913 Stupas in a monastic block Gandan in Urga. Lamas at the Yellow Palace Triumphal Gates of the Yellow Palace in Urga Badamdorj in vicinity of the Yellow Palace, Urga, 1913 Nomadic settlement in Inner Mongolia. China, 1912 (a shot from the previous expedition to China) Two Buryat riders in Troitskosavske (a district town of the Zabaikalsk region, 4 versts from the Chinese border)

In 1921 wind of change came to Mongolia and a new epoch began.