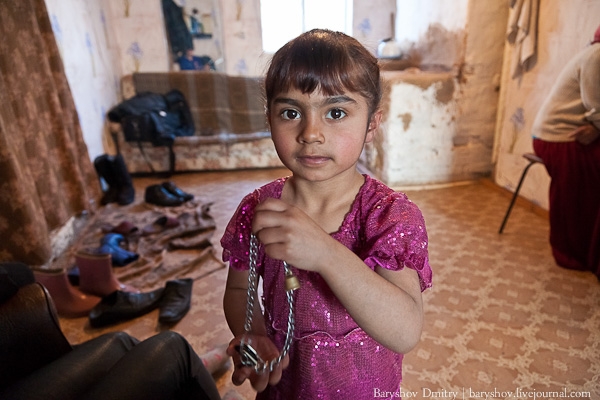 This Gipsy band has settled on the outskirts of Algeshevo, the most populated area in Chuvashia. The band is ruled by a Gipsy Baron. In general they have 15 houses and a bit more than 300 people – it’s only several families. By summer they plan to increase the number of children and consequently their population up to 400. Many kids play in the streets, those who are not too little repair the roof, young girls avoid cameras. In good weather children don’t want to return home. Despite their light clothes they are rarely ill. In bad weather they watch TV. Typical house of a Gipsy family. In one of such houses Baron lives. Inner porch, some unnesessary stuff, drying space for clean linen. In summer they prefer to use gas stove not to fire a furnace in a house. Gipsies are watchful people. Strangers are not allowed to come close at once.

The first impression about the house is cleanness. Dishes are clean, floors are cleaned several times a day, each thing is on its place. Men mainly work with metal. Women spend their days at home, keeping houses and bringing up children. Gipsy women don’t walk along streets with babies begging for money anymore. According to Baron it remained in the past. Young Gipsy ladies haven’t learnt from older generations to tell fortunes. Hostess of the houses. She often smokes and ashes on the floor, that is why they are constantly washing it. Women’s clothes are always bright. Any color but black. Men wear dark clothes, mainly suit trousers and dark shirts. Women wear long skirts, they look nice when they perform national dances. Married women have to wear kerchiefs on their heads. If a Gipsy man sees a woman with a kerchief on her head he cannot court her. Men have a right to marry women of any nationality while women can marry only Gipsy men. Society the Gipsies live in has a huge influence on them, their religion. Chuvash Gipsies, for instance, are mainly Orthodox ones with some traditions of their own. Gipsies living in Tatarstan are mostly Muslims. Nomadic Gipsies accept a local religion. There are icons in each house.

They have no bathhouse and go to wash to relatives who live in apartments. 11 thoughts on “Life of Chuvash Gipsies”