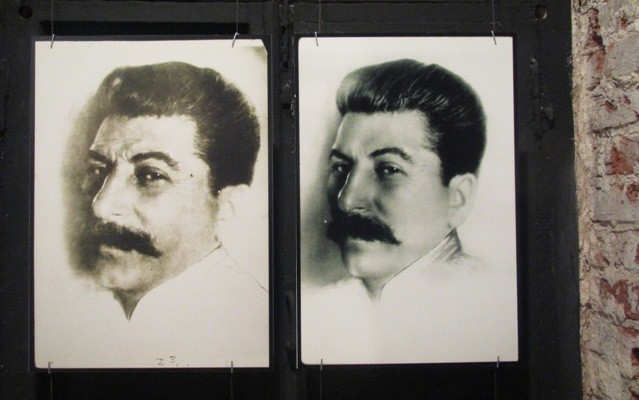 These people even can’t hide a watch on the picture…

But in Soviet time they did well without Photoshop.

For a proof you can go to the GULAG exhibition in the Moscow Museum devoted to photography falsification in the epoch of Stalin. It’s called “The Commissar Vanishes”, though not only commissars used to disappear and not on photos only. .. 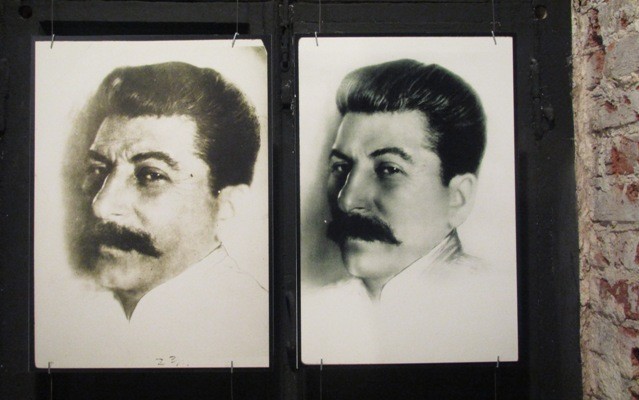 Photo falsification in the Soviet propaganda had not only a long history but an excellent technologic school as well. Sometimes it was just an expert retouch – leaders’ faces had to look exemplary. This is one of Stalin’s photos before and after processing.

Retouchers could easily change the clothes on photos. Probably Lavrenti Beria liked his face on this photo but for a publication he preferred to be in civilian clothes. Old historical photos were doomed to be changed. Here are exile bolsheviks in summer 1915, the Turukhan region. Stalin is behind in a black hat, and a bit more to the right is Leo Kamenev (with mustaches). Later they became enemies. And voila – he disappeared from the photo. Though it still looked primitive, instead of the figure we see some obscure black spot. A legendary photo – Lenin and Krupskaya with children in Kashino village. In fact adult villagers were also on the photo, later they all were dispossessed and expelled. The photo was cut and the background was darkened. Group photo dated 1919, VIII conference of the Russian Communist Party. Lenin, Stalin and Kalinin were all initially on the photo but soon Kalinin disappeared – no third figure was necessary when everyone knew who was a true successor of the leader. Still we speak about ordinary cutting. More complicated methods were also applied. Here’s a picture of revolutionary soldiers, but under some black flag with an advertising sign in the background. Of course proper slogans would be more appropriate to be there! “Away with the monarchy! Long live the Republic!” Out of 8 persons only 4 remained. But on the initial photo – Frunze (second to the left), Voroshilov (fifth), Stalin (sixth) and Ordzhonikidze (eighth) do not stand next to each other. They couldn’t correct it without a defect – Frunze has some odd shadow on his body side. Leo Trotsky was the one who was especially carefully removed from the photo history. They were not even embarrassed by the fact that the same photos were repeatedly published. This famous photo where Lenin and Trotsky stand next to each other even became the basis for a picture of Diego Rivera. On the latest publications only Trotsky’s elbow remained… There were more skillful falsifiers, of course. Here’s Lenin on a meeting (Moscow, May, 5th, 1920), and Trotsky and Kamenev behind him on the stairs at the tribune. The photo is famous but in publications after 1927 there is nobody on the stairs… By the way, in 1933 a social realism master Isaac Brodsky was trusted to immortalize the scene on the painting. He probably couldn’t keep the breach of the composition and on the place of the disappeared politicians journalists appeared! Another diligent work. A walk along the canal Moskva-Volga, to the right is Nikolay Ezhov, Internal affairs commissar. But he was executed by shooting and couldn’t stay on the photo. Some authors rushed to change their works on their own initiative. Vladimir Serov got a Stalinist prize in 1948 for this well-known picture . Probably it was the image of Stalin that helped him in that. However in 1962 the author repainted the picture, and ultimately changed it. Not only Stalin disappeared from the picture, but also Sverdlov and Dzerzhinsky. All the three were replaced by revolutionary soldiers. Thanks to this timely idea Serov found his last shelter in the Novo-Dyevitchiye cemetery. Now all falcifiers were so lucky. Gustav Klutsis, an excellent master of avant-gardism, didn’t manage to finish his poster devoted to the Red Army. Repressive Tukhachevsky and Gamarnik (marshal Yegorov executed later was still present on the poster next to Voroshilov) were cut off. However Klutsis himself was executed before. You have a chance to visit the exhibition till July 2012.

6 thoughts on “Photoshop Of the Soviet Time”