It’s the main arena for the forthcoming “Eurovision-2012” contest built on the Square of the State Flag. Officially the construction was over in April, 16th, 2012, currently they are doing finishing works. For some months a German company has built the main music venue in Baku. Let’s see how it matches the city and what’s inside. 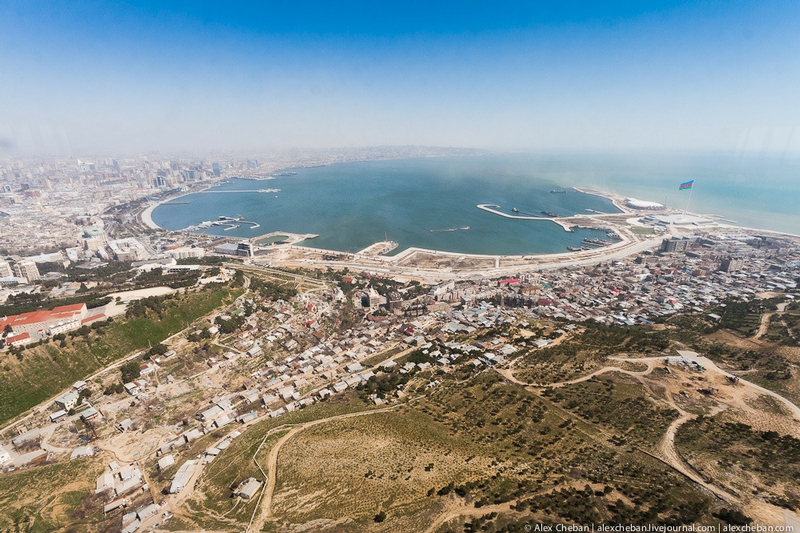 Baku from a TV tower Square of the State Flag

German company «Alpine Bau Deutchland AG» received the order for the project from the Baku concert complex. The government of Azerbaijan will pay 131 million dollars for the construction and 136 million dollars more for a 3km road to the Square of the State Flag.

The complex will seat 23 thousand people. It will meet all modern international standards, will have enough entrances and exits. In case of emergency all visitors can be evacuated for 8 minutes. While being constructed in April 2012

The area of the square occupies 60 hectares. Height of the flag-pole – 162m. The total weight of the construction – 220 tons. Width of the flag – 35 m, length – 70 m, total area – 2450 m2, weight – about 350 kg. There are also images of state symbols on the square – the arms, hymn text and the map of Azerbaijan, all made of gilled bronze. Here they also opened the museum of the state flag. Baku is known as the city of the winds, but thanks to modern technologies, the flag-pole can stand wind with speed up to 58 m/sec. However when the wind speed is higher than 20m/sec, the flag must be hauled down. Each year in Baku has 40-50 of such days.

According to the height of the flag-pole the object was listed in the Guiness Book of Records. But it’s expected that soon there will be built an object a couple of meters higher. While the construction process some dwelling houses were dismantled. However that 16-storey building remained. Let’s see at the Crystal Hall from the upper floor… Crystal Hall and Böyük Zirə island in the Caspian sea 15 km from Baku.