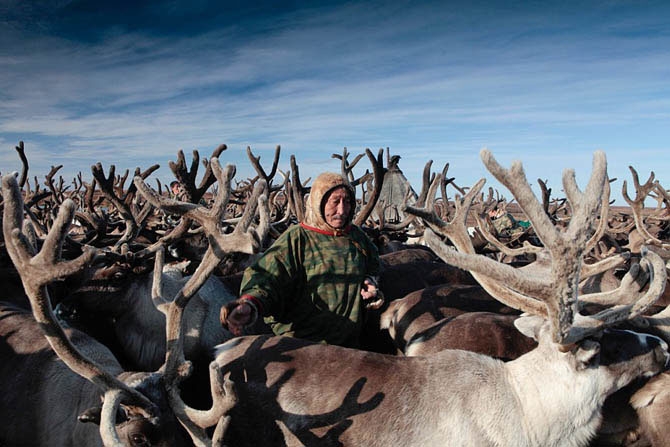 Yamal is often called the region of deer, though in translation it means “The end of the world”. It is inhabited by representatives of the ancient people who’ve been keeping traditions from time immemorial. Nenets are the main settlers of these territories, they life directly depends on deer. For tundra dwellers deer is an object of cult and the main source of food, income and transport in severe nature conditions. Yamal is the very place where the largest deer herds of Russia inhabit. They join their owners when they overcome very long distances. Under the rule of Stalin the Nenets were divided into some groups. They had to live in collective farms and pay taxes with deer meat because they were always short of money. Yamal peninsula is situated in the Kara Sea, in the north of Western Siberia, being a part of the Yamalo-Nenets autonomous region of Russia. It occupies 700 km in length and about 240 km in width. The nature of the peninsula is mainly tundra, there are many pure lakes there. There were found large deposits of natural gas in Yamal and this fact undoubtedly influences resettlement of nomadic Nenets. Extraction processes in the region become the reason of pollution. The Nenets live in cone-shaped tents made of deer skin. It’s the main type of housing in Siberia. One tent may require up to 80 skins in winter. In general about 700 thousand deer live on the territory inhabited by the Nenets. The whole life of these people is built around deer herds, their habits and seasonal migrations. Deer meat contains B vitamins, vitamin A and C. After the collapse of the USSR young Nenets more and more dreamt of urban life. But it was not easy to get used to city civilization after being grown up in tundra. In city environment they are often sick, have mental deseases, can’t find a job… So they stay in tundra, on the permafrost territory. It is Yamal that provides 20% of natural gas in the Russian Federation. “Gazprom” company together with the region administration launched the project “Yamal” in 1990 that will start its work in May, 2012. They will supply Western Europe with high-quality natural gas. Though the Nenets do not like the idea, they suppose that people of the tundra may not survive in the technificated region.

Local scientists worry about the basins pollution that is caused by human interference in the life of nature. Tundra is rapidly changing under the impact of the progress. Thus, they have built the northernmost railway 520 km long here. Some years ago one Nenets herdsman found a corpse of a baby mammoth that was perfectly preserved in the permafrost conditions of the peninsula. It died about 42 thousand years ago. The Nenets call mammoths “Bulls of the Earth” believing that their tusks belong to mother nature. Herdsmen resettle each season moving for thousand of kilometres. In winter the temperature reaches 50 C cold, so they go to taiga, southern forests.

For many thousands of years a man and a deer have been inseparably connected. From the Nenets language “deer” is translated as “giving life”. And the aboriginal dwellers of tundra call themselves “children of deer”.

1 thought on “In the Region of Deer”