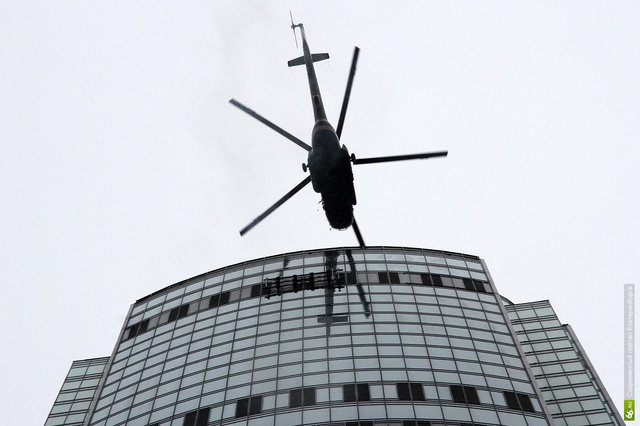 On 11th of April in the city of Yekaterinburg EMERCOM held training of extinquishing the highest building of the city – 190m and 54 storey skyscraper “Vysotsky”. 66 persons, 14 units of military equipment including 68m hoist and helicopter MI-8 participated in the training. The first fire truck is approaching right along the oncoming traffic lane. Other trucks are coming The vehicle with the hoister mechanism is reaching the main entrance of the building. The crew in the vehicle consists of 2-3 persons only, everything is automated. A fighter occupies his working place. A cabin with fire hydrant rises up. But a 68 m boom does not reach even the middle of the 200 m building. There are also these EMERCOM rescuers to act on height In extreme case people are evacuated by a helicopter. People are watching the operation Conditional psychologists and doctors work with the conditional victims During the training the firemen had to go up the 51st floor on foot and go down back with the conditional victims. Nobody suffered.

Let’s hope they won’t have to do it in real situations.

4 thoughts on “Extinguishing The Highest Building In Yekaterinburg”