This family has been living in the stall for over five years. The stall is situated almost in the center of the city attracting the attention of passers-by with its unusual look. Ulan-apa used to work as a cook, had a family and lived her life just like other families in Kazakhstan. In 2000, they all decided to move to Almaty but a tragedy happened… her son died in a car accident. Her husband who had lost three sons by that time could not stand another loss and died shortly afterwards.

In 2007, the woman faced financial difficulties. She could not afford renting an apartment any longer and had to buy a stall for $200 to live there with her daughter and grandson. Elmira’s husband left the family after she gave birth to a child. She had to undergo a course of medical treatment in a psychiatric hospital. 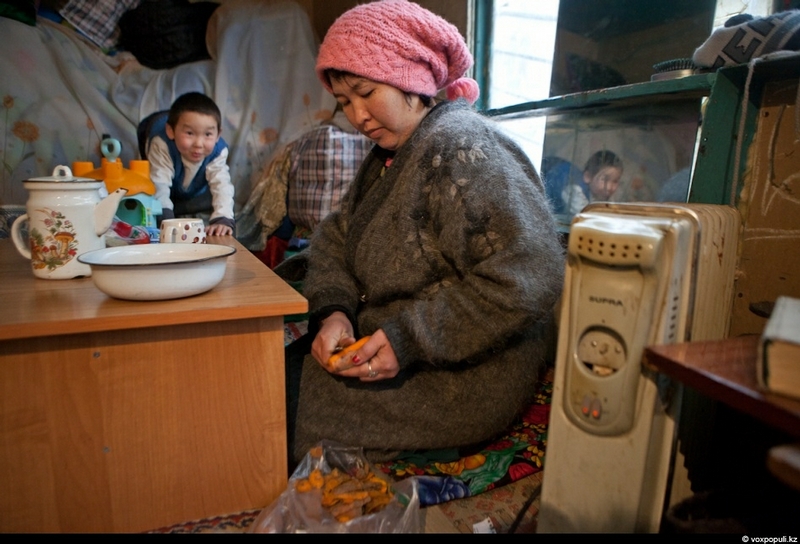 It is extremely hard for these people to live under conditions like that but they have no choice. They do not work right now and their only source of income is Ulan-apa’s pension ($162 a month). Neither of the women has a residence permit in Almaty so they cannot receive support from the city administration. Besides, it is almost impossible to find a job for Elmira because of that treatment she had. Her mother is a retiree and she can hardly move by herself. They have no relatives in Almaty which could help them. This kid has been living in the stall all his life and that’s the only life he saw. This stall is his home, his kindergarten, his bedroom and his playroom. Some people donate food, clothes or money to this family. This is why they manage to survive. They sometimes take a shower at their kind-hearted neighbors’. The woman says that it if her husband and son were alive, they would not have had a life like that. But it is very difficult to live having no support at all. It all happened really fast. At first it was her son’s death and then her husband died. Then she realized that she had no money and later she found herself living in the stall.

The only thing left for this family is hope. They hope to receive support from the city administration. They hope that people will not forget about them. They hope, no matter how trivial and silly it may seem under the given circumstances, for the better.

4 thoughts on “Living In The Stall”