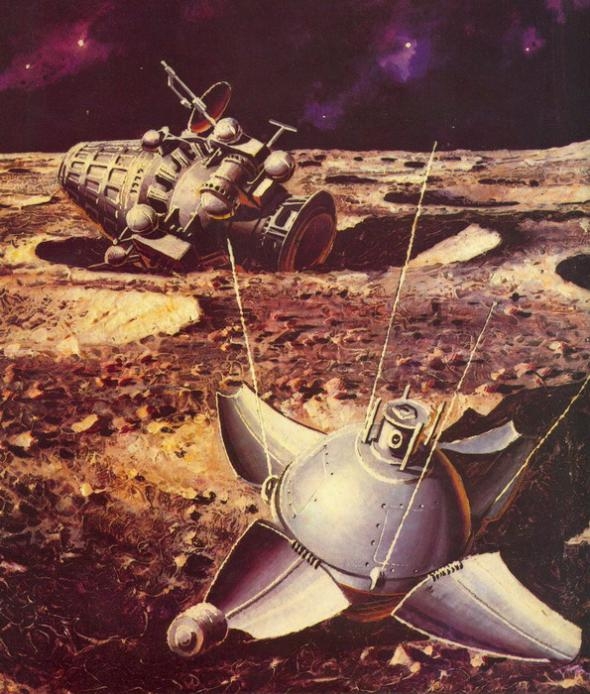 On February 3rd, 1966 the Luna 9 spacecraft became the first spacecraft to achieve a soft landing on the Moon. Tsiolkovsky’ initiated space exploration with his inspiring speech when he said that the humanity would not stay on Earth forever but would step by step conquer circumterrestrial space. They discovered that we can see only one side of the Moon because relative to Earth, the Moon makes one rotation every 29.5 days. That happens to also be the time it takes for the Moon to complete one revolution around Earth. This is why we always see the same side of the Moon and it is achievements in space exploration which allowed us to see its “dark side”. The Soviet space probe Luna 3 of 1959 was the third space probe to be sent to the neighborhood of the Moon and return pictures of the far side of the Moon, the views which had never been seen before. These views showed mountainous terrain, very different from the near side, and only two dark, low-lying regions which were named Sea of Moscow and Sea of Desire. It was the Luna 9 spacecraft which in 1966 transmitted photographic data from the Moon to Earth. The spacecraft worked for 75 hours and the photographs it transmitted, when assembled, provided a panoramic view of the nearby lunar surface. The pictures included views of nearby rocks and of the horizon 1.4 km away from the spacecraft. In 1969, following the success of the Soviet Union, the United States’s Apollo 11 became the first manned mission to land on the Moon.

13 thoughts on “The Soviet Luna 9 Spacecraft”