Kazakhstani Electrolytic factory is the only manufacturer of aluminum in Kazakhstan located in Pavlodar. 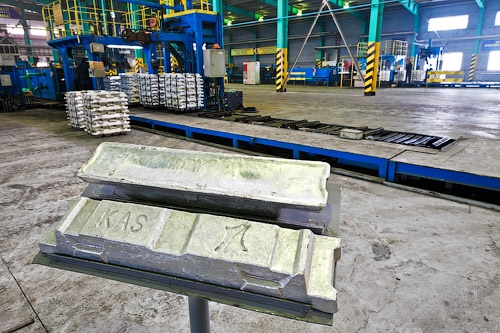 The cost of the industrial enterprise is 900 mln US dollars. It produces primary aluminum in the form of aluminum ingots 20 kg each. In 1854 Henri Sainte-Claire Deville, invented the first method of industrial production of aluminum, based on the isolation of aluminum metallic sodium from sodium chloride and double-aluminum. In 1855, was received by the first bar of metal weighing 6-8 kg. The first commercial method of aluminum production was developed by Charles Hall in 1886. The method demanded huge power costs and could be applied in the 20th century only. He had the idea that if he could find a non-aqueous solvent for aluminium oxide, he could produce metallic aluminium by electrolysis, using carbon electrodes. On Feb. 23, 1886, Hall found that molten cryolite, which is the mineral sodium aluminium fluoride, was the solvent he needed for the process; using the cryolite and aluminium oxide and homemade batteries, he produced his first small globules of aluminium. Charles Hall was an American chemist, but the same electrolytic process was simultaneously discovered by the French chemist Paul Heroult. Today they use carbon electrodes to supply electrolyte with current. Electrodes are produced at carbon facilities. They are planning to build more facilities here. The electrodes have already been used. Liquid aluminum is kept in the furnace for 30-45 minutes and at 700 degrees. The ready-made products are packed and sent to the warehouse. Each pallet costs around 2600 US dollars. 1 thought on “Modern Production Of Aluminum”