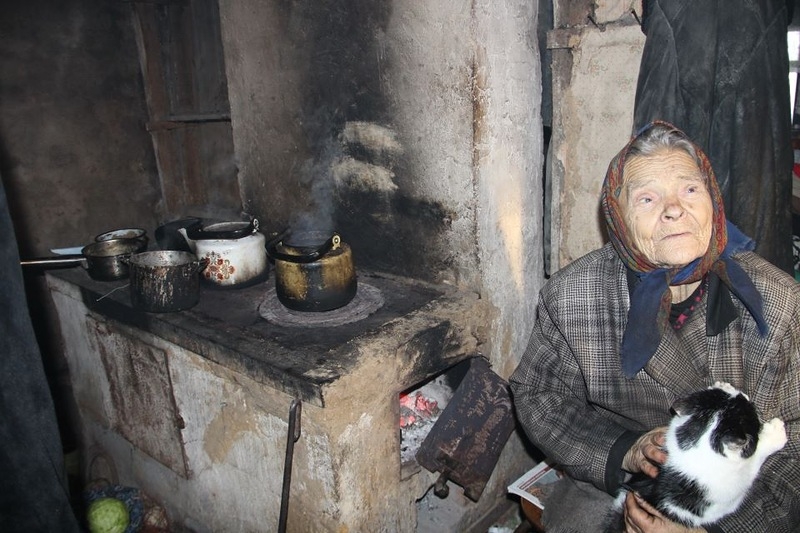 A group of volunteers headed to a village in the Tula Region to visit an elderly lady who they heard needed wood to burn in her stove or in other words were in trouble. Entering her home, they found her sitting next to the stove with tears in her eyes. It was very cold and it smelled like dampness. She said that she was praying for help all last night. She had almost no food left, it was very cold and water in pipes got frozen. On the table, they saw her lunch, an old cup with pottage of water, flour and bread. The lady smiled when she saw that the volunteers had brought some firewood and a hope appeared in her eyes. The babushka was so thankful to the volunteers that she offered them pretty much everything she had in her house, potatoes, tea, her old fur coat and hat. They politely refused. The 82-year old has been living in this house alone for over 27 years and she was going to die here. A possibility of moving to a nursing home was alien to her.  She said she did not need a lot and moreover her fellow villagers would sometimes help her with clothes, blankets, books and other useful things. However, there was no floor in her kinchen… The woman mentioned that she used to work in the police and travel around the Soviet Union a lot. Now she was alone but was still very happy that the volunteers brought some food to her and heated the stove. It became warmer in the house and she was going to do the laundry and take a shower some time later. She has managed to preserve a positive attitude and still believes in God. Her home is full of icons. She is always happy to see other people because she has nobody to talk too. Her family died long ago. How is that possible that in the 21st century, in the country busy constructing sports facilities for the Olympic Games, in the era of the Internet and space satellites, an 82-year old lady is freezing in her home? Who knows how she felt after the volunteers left. What if she fell and cannot stand up… She ceased waiting for help and attention from people passing her home by a long time ago.

31 thoughts on “Some Help For Babushka”