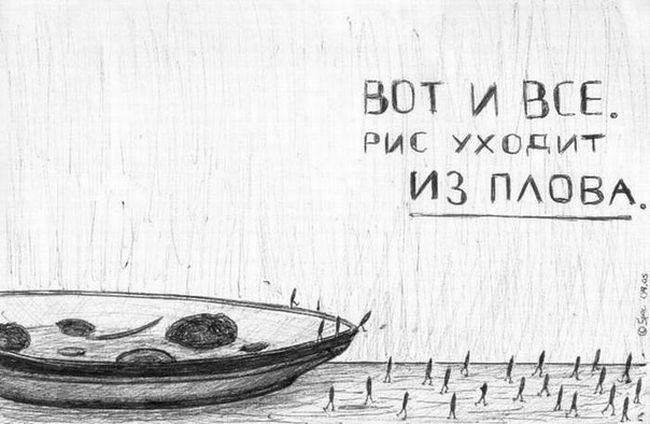 Drug addicts have strange ideas and illusions. They see this world in a different way. Look through some pictures made by a drug addict who wanted to show others what is happening in his head. ‘It is all over, rice is leaving the pilaf.’ “The boy found a huge thyristor covered with fresh green paint. The boy was examining the device and failed to notice that there was somebody else in the forest. Children stopped disappearing only after green paint was all sold out in the local shop.” The small elephant is eating tomatoes from a can (a bottom view). “A cycle pump and fallen bicyclers.”

“The warehouse of domestic appliances was guarded by a patrol prostate.” “A couple of condoms is sometimes more precious than 120 cases of canned tomatoes. (120 boxes)” “Peace to the world! An engineman and 8 oysters.” “Potap is a shepherd of a cheese herd.” “It is not easy to sell potatoes when you have claws instead of hands.” “A cardboard forest is deprived of mushrooms.” “It is tough to live inside a kettle-bell as it will put next to food at 4 p.m.” “A pan with peaches is sailing along Baikal lake.” “A goat and octopus Vasya are sailing to Tallinn (fly view).” “Extracted teeth want the doctor to admit the fact of the oral cavity occupation and demand compensation payment.” “The winter tent is located under the ice.” “The flat-fish left its can and checks whether children in the kindergarten are sleeping well.”

Aeroflot is losing its passengers. “Mummies older than 300 years old have a right to buy food products of high demand out of turn.” “Candies fall in love and dedicate poems to each other.” “The bird is pooping on the ship minding direction of the wind.” “A skate in water or a sea-horse?” “The HHD is cheating on the memory with the hairdryer.” “The boy went to the autumn forest to pick up some mushroom but was scared to death by the speaking moss.” “Abacus, an apple and a pencil. The picture is not very nice as a postman is falling out of the window.” “The cheese was called up for military service by mistake.” “There were small astronauts in the washer.”

13 thoughts on “Illusions Of Drug Addicts”