Any holiday is the best time to discuss sweets. Today we’ll talk about marshmallow made in Kolomna which is one reason that makes the city worth visiting. The museum of marschmallow was opened in Kolomna in September 2011. People from the former USSR have always thought of marschmallow as soft and sweet sticks of different colours. But real marshmallow rather reminds of French souffle sweetmeat. 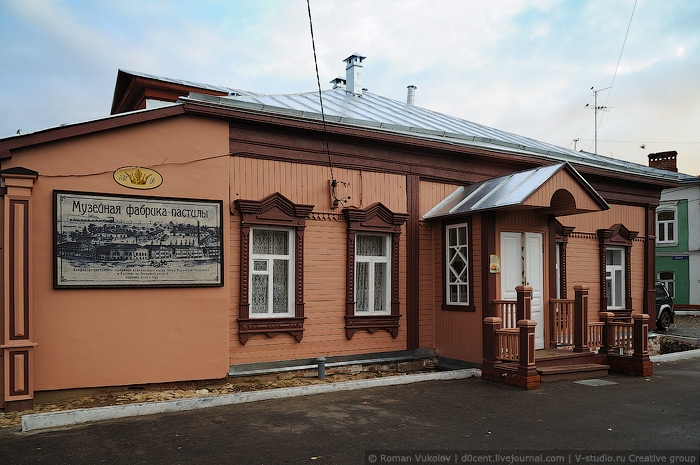 Real marschmallow is left in a Russian stove for many hours. Before that a thin layer of paste made of apple sauce, honey, sugar and egg albumen is distributed over a cloth. After the layers are dried they are put onto one another in wooden boxes and are sent to the stove again. Two places in Kolomna are devoted to marschmallow. The first one is represented by a museum that works from 10 a.m. to 8 p.m. Here one can go to the excursion, drink some tea, try and buy marschmallow and watch several theater performances. Thus, you may see how they celebrated Christmas in ancient times and performed old Russian rites. This house in the picture was built over 200 years ago. It belonged to Russian merchants. A legend says that Masons used to visit the place where they drank tea and ate marshmallow. The interior design was used in the 19th century. There are a lot of ancient utensils here. Some marshmallow is located on the right. The marshmallow is said to protect from hard drinking and is packed into special boxes on the antique order. The museum was opened in 2009 and brought marshmallow of Kolomna to life. Samples of marshmallow at the entrance. The second place is represented by the factory of marshmallow where one can try the sweets, see how they are made and even participate in the process of their making. The factory was founded in 1852 by a merchant Chuprikov. His goods were popular not only in Russia, but also in Europe. The person is a relative of Chuprikov. During the excursion he shows an elevator that used to lift apples from the warehouse to the upper floors. The adjacent drum was used to clean apples before marshmallow making. Many objects are modern replicas. They say the scales were made in China.