The 72-year old Nina Adolfovna is lucky to have a great view of the Byelorussian White House. Meanwhile, she goes to her shed to take some wood to heat the stove to warm up her home. This is a story about people living in shacks next to the dwelling place of the ministers of Byelorussia. 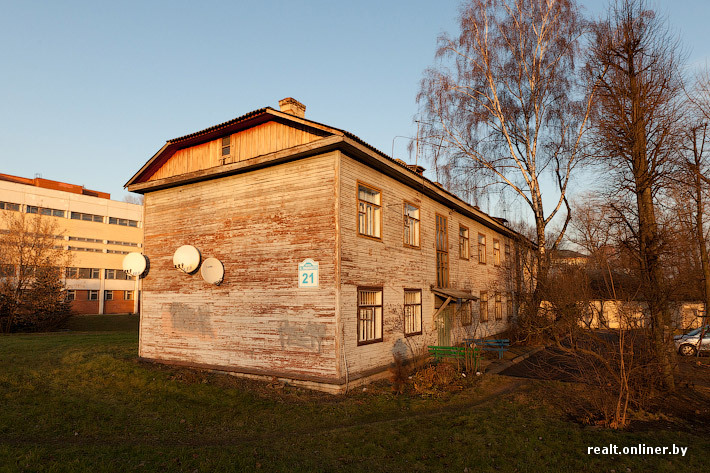 Two shacks facing the White House have been here for several decades. They look awkward in downtown Belarus. The point is that this land has been assigned for ‘Triple’ company which now is busy doing some other things but to take the land back and reassign it to some other construction firm would be too daring for government. At first they planned to build a luxury residential community here but their plans seem to have changed. Some say that now they want to build a hotel but noone knows for sure. Just as noone knows what is going to happen to these people. The house Nina Adolfovna lives in was built in 1953. He lives alone and has to buy wood for winter and hire people to unload it because she’s too weak for that already. There is no hot water in the shack and last year, when the pipes got frozen, there was no water at all! This house was built in 1939 and some time ago it was declared to be in emergency state. One of the apartments. Instead of demolishing the houses and providing the residents with new accomodation, they sometimes shoot movies here… about Hitler and World War II. They have written a letter to the president and hope to obtain justice. This winter is going to be hard for Nina Adolfovna.

2 thoughts on “Shacks In Downtown Minsk”