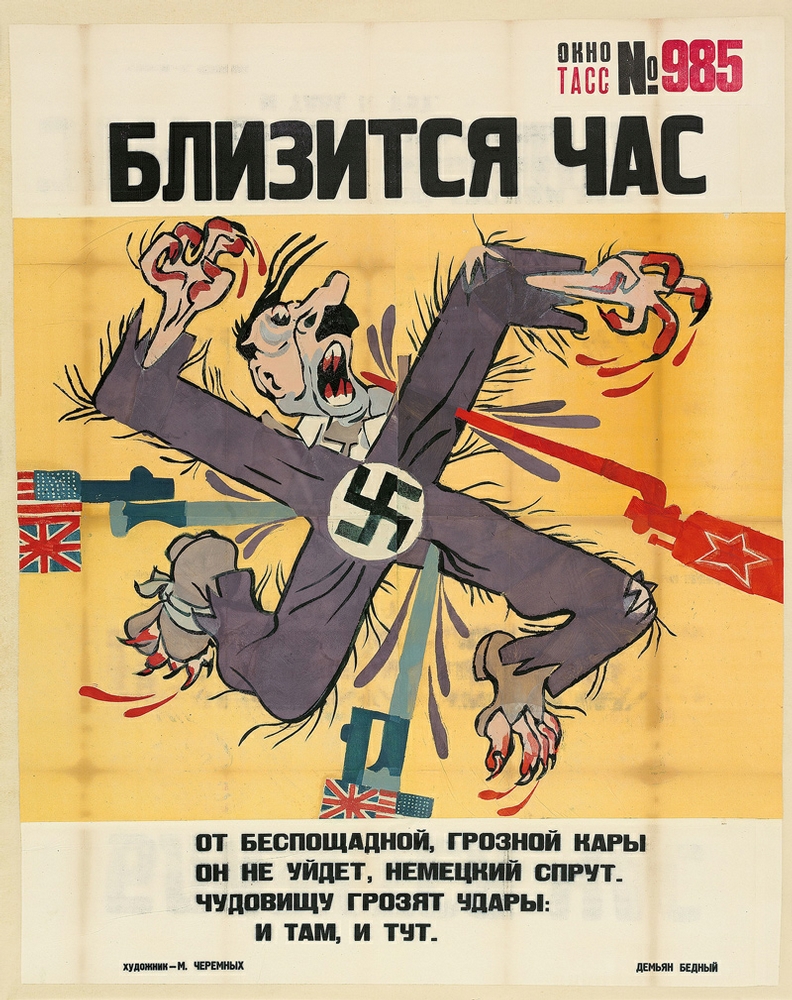 The Day of Reckoning is Getting Closer.

The German monster will never escape retribution and is doomed to be defeated.

An exhibition devoted to Soviet agitational posters is taking place in New York and is going to last until January, 7th. These posters were especially important during World War II because it was they which maintained patriotism and spirits of the Soviet people. We are proud to know that the pen is now equivalent to a bayonet and helps in fighting against the enemy. In spite of Goebbels’s reassuring speeches, confusion in the German Army keeps growing.

All the buds have faded and one has even fallen down. Goebbels is the flower grower and knows his business but it is not going to save the flower anyway. You Must Reap What You Have Sown!

The fascist evildoer is terrified! Soviet farmers are going to sow oats, wheat and rye. Just like the Soviet Union will gather in the harvest, Hitler who has sown wars will reap his death.

Another city has been liberated by the Soviet Army! Heroes! The country is happy to hear another piece of news about your successes! Let the Battle of Stalingrad be the last straw in defeating the German Army! Are those birds? No, they’re not. Those are blown up Nazis. Good job, partisans! Glory to the Soviet Young People!

Soviet youth hardened by war and work is the future of the country!

How Hitler Brings up German Youth.

Hilter brainwashes the young Nazis so they never think by themselves. Young people are turned into bandits disgracing the country, who by the way are unaware that bandits always come to a bad end.

No Nazi will escape from Soviet seamen! So Let It Be

Hitler is telling his fortune for the next year and everything says that he will die soon.

This poster says that all ‘art workers’ who participated in plundering European and Soviet museums, art galleries and churches, are meant to suffer retribution.

Fascist reports on their success are false. It is Soviet submarines which destroy German ‘sharks’. We have to liberate our land from Fascist aggressors and restore the state boundaries from the Black sea to the Barents Sea.

In Germany, each newly married couple must purchase Hitler’s book ‘My Struggle’ which has brought him millions of marks in profit. Transformation of the Nazi. Today is a great day in the Soviet Union! The Red Army has defeated Romanian and German occupants in Odessa! We’ll do away with the Nazi gang,

It’s gonna be the year in which the enemy will take it on the lam!”