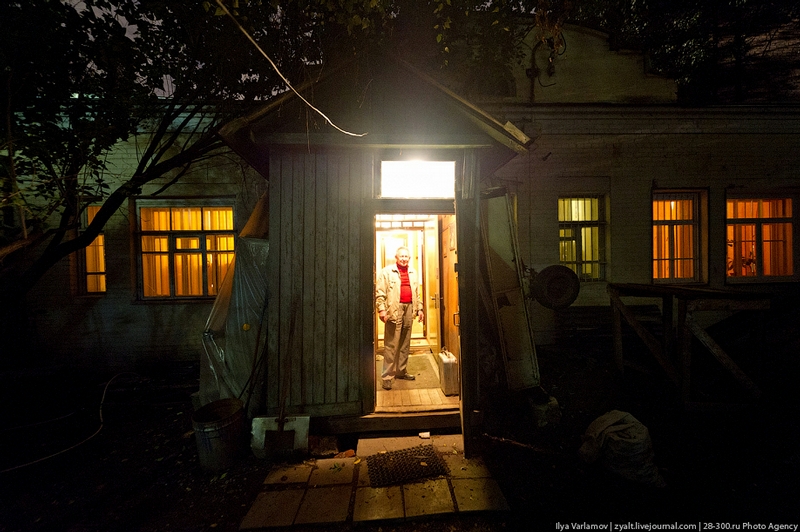 A few people know that just a few meters from the Kremlin near the Sofia Embarkment and behind the pompous buildings of the Russian Oil Giant, is a privately owned house. The house belongs to a one Mr. Victor Anatolevich Rozanov. One of Moscow’s central home owners and the direct neighbour of the Kremlin.

Victor, a Professor with the Institute named after Baumann, is a 73 year old man who has lived in this house with his family since birth. He currently lives there with his wife. He briefly talks about his home, the history that sorrounds it, its odds among other twists and turns. Victor, cheerful in his early seventies looks even younger. He says he has spent a better half of his life fighting for his home. The first attempt to evict him took place 40 years ago leaving him with a strong will for securing his home from intruders. He proudly says, Â “My house is my Castle.” A view of the Â Kremlin from his roof. You can tell the time of the day by looking at the Tower of the Saviour. When asked for how long he has been living at his current home, Victor starts his story by saying that he was born here in 1938. His story dates back to the 1920’s when the Bolsheviks required builders for the Institute. A man was offering a ruined building for restoration and gave the rights for acquisition. When his father in 1920 saw the house, there was no roof on it, neither were there any windows nor doors. There were mounds of ice from burst water pipes. His father took this house and began the hard task of restoration. Here the family lived. In 1941 when the war broke, “bread cards” were not offered to private home owners. With two children, Victor and his sister, his father found himself working at a defence plant. The family could not die of hunger so they decided to rent the premises to the government. When the family returned there from evacuation the place was already a Â communal flat housing four families. Then the government started building five-storeyed houses and there was a rush for apartments in these elite living complexes. The neighbours left and the family decided to privatize the house after the prosecutor tried to evict them. Everything was restored including his father’s belongings. This whole process took about six years and the land area that was given was 326 square meters. In the house is a real fireplace.

In the 1970s when only two families remained in the neighbouhood, a notice for relocation was sent to Victor from the Headquarters. He did not want to move. So he threw away the piece of paper. The notices still kept on coming. Then came a notice for him to go to the headquarters, if he did not attend the case would be taken over by the prosecutor. When he went there was no basis for his eviction so he was let free.

When a notice came from the prosecutor, Victor went to meet a young lady at the office. She asked him, “Young man, are you the one breaking the law?” He replied, ” No, I did not, but, some members of the Soviet authorities are violating the law. Firstly, Â no relocationsÂ are allowed toÂ worsenÂ the living conditions of a citizen, I have aÂ separate apartment, here’sÂ the floor plan, and they want meÂ relocatedÂ to the communal flats.Â Secondly, even ifÂ youÂ offered a meÂ two-bedroom apartment inÂ Konkovo, itÂ will also break the law.Â By the Â decision of UNESCO’sÂ remotenessÂ fromÂ the place of workÂ is the Â qualityÂ of living conditions.Â Currently I walk to the city center to work in 5 minutes.Â ButÂ as I understand , the Board does not have any free flats in the city centre to offer.Â Thirdly, the ceilingsÂ in my house are 3.5 meters high, and such will not be there wherever they want me to go. And I currently live in a brick house, the only ones they have are concrete ones in Konkovo. That means the decision of the Board breaks the law since it violates DecreeÂ â„– 91Â of the CC CPSUÂ andÂ the Council of Ministers.Â ” When asked whether there were any attempts to evict him in the 1990s. Victor says that they only threatened to “pull out” the road. But then his wife came in handy and added dogs to the family. The dogs have in several occassions caught illegal arsonists. When asked for how long the house has been standing. He states that it has been up since the 19th century. It used to be the Manor of the Matveev family and they lived in it. And after the Revolution the house became communal and was since then restored by his father. During the Post-Soviet era the history of privatization became so long that it took more than a year or two. In all instances the government lost and the final case was decided by the Strasbourg Court that gave Victor the winning rule. The long story of Rozanov proves the fact that there are people under which Moscow stands. These are the people who do not give up and have the courage to defend what they love most. In this case, his piece of land and home. In the compound is a boat. Earlier Victor used to take it to the River Moscow directly across the Kremlin but these days he has to look for the nearest river station. 8 thoughts on “Neighbour of the President”