At sunrise hard-working and courageous hemp growers go to a field as if they were fairy-tale heroes. Stock is waiting for them. They will kick it with their legs. Hemp has been picked in this way for centuries. Say, hemp growing is not only handwork but also “legwork”. Russian hemp will make them famous in the whole world!

Nikolay Darichev, a director of Bolkhov hemp factory, works as an ordinary worker. There are 30 of them. But it’s hard to call them heroes – moreover there are many women among them. But the work is really hard. 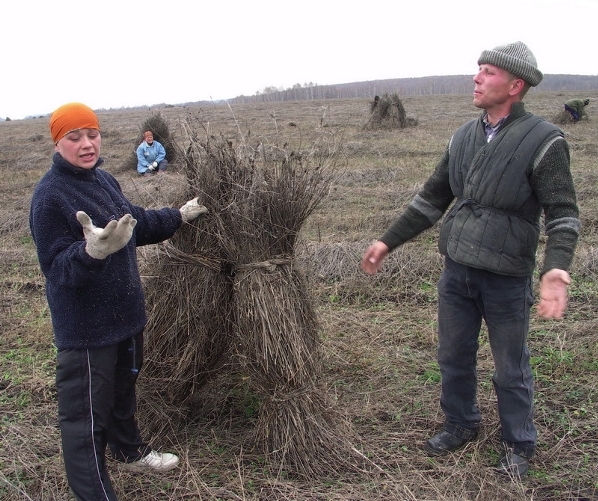 The factory performs some social function. There are many boys and girls from local orphanage who are left without home and work. Larichev has hired 4 girls over the last 4 years. They have comfortable rooms in an administrative building. Girls run household, cultivate their own vegetable gardens and work in a hemp field.

Don’t laugh at word “hemp”.  Long ago, Russia was famous for its hemp in the whole world. For example the city of Bolkhov. According to the report there were about 16 hemp and oakum factories in 1868. The total turnout accounted for 1,5 million rubles (year income of the whole province). Bolkhov merchant Merkalov was admitted at industrial exhibition in Moscow. He was awarded with a gold medal. And Tsar’s edict said: “to hemp manufacturer Aleksey Mercalov for great production of  hemp for import.” All local fields smelled with hemp. In Soviet time there were 6 Heroes of Socialist Labour in the Bolkhon region. 2 – livestock breeders, 4 – hemp growers. There was a sovkhoz named after Lenin specializing in hemp growing. Hemp fields occupied the territory of 2000 hectares. Today kolkhozes don’t grow hemp anymore. Actually they could but there are no specialists left – died, became drunkards or went to earn money to big cities. Thus the hemp factory has to lease local lands and factory employees work there from spring to autumn. Produce processing itself begins in winter.

Today there is only one hemp factory in Bolkhov.  And cultivated territory accounts for less than 300 hectares. Practically there is no more hemp production left in the country. But Bolkhov hemp factory looks pretty good against the background of decline. But as usual it was reached through hard work. It couldn’t happen without selfless people. That’s why all the employees work in the harvesting period. The period is too long, the whole autumn until it snows. It’s the reason why the director works like everyone else. It’s necessary to finish in time. Relatively not so long ago there were 14 hemp factories in the Orlov region. They all were branches of “Orelpenkoprom” enterprise. It is unique due to the fact that it has preserved Soviet framework for 15 years after its dissolution. Why? Demand for hemp has never had a decline. There are factories producing  cords and ropes in the country. While the development of hemp growing the Chinese wanted to supply Russia with jute. But it was found that jute ropes are several times less strong. Scientific fact! Not only hemp ropes but cords are very strong and wear well. As if hemp was created especially for sea. Even the core of steel ropes is made of hemp. It is lubricated to prevent steel from oxidizing in stern conditions. Rope factories of Dzherjinsk and Gorbatov (the Nidzegorodsky region) buy local hemp. And the price is rather high – up to 1000$ per tonne. Unfortunately Bolkhon hemp factory may be closed. “Orelpenkoprom” has money problems and only half of 14 factories work effectively. In the neighbouring Znamensky region due to famous kommunist Zuganov (who was born here) Voroshilov hemp factory got 0,7 million $ of investment. The factory was closed soon after it. The Bolkhon factory operates in spite it had no investments. But now it is on a knife-edge. It is also disappointing because the factory was burnt by fascists during World War II and it was the first to be restored in front-line city after the victory. The government understood importance of hemp growing. Today it is not bad times for the country but we can see absolute indifference to this industry. We’ll talk about the reasons for it later and now – about hemp growers and their “leader”. Zarichev knows everything about this industry.  Particularly in neighbouring to Orlov regions things are rather bad. There is only 1 factory in the Kursk and Bryansk regions. The Krasnodarsk region – 2 factories, Mordovia – 5 (there is even a village called “Red hemp grower”).  Hemp growing is slowly improving in Chuvashia. Actually there’s wise agriculture policy there. A research institute in Penza works out new hemp species. But as all Russian scientists they have low salaries. In fact that’s the whole industry. The Chinese often come to study secrets of growing and processing the hemp. But nothing comes out of it – maybe Russian land is a real “hemp oasis”… Some information about vocation of this plant. Agriculture hemp has about 0,001% of narcotic which is contained in wild hemp. “USO-6” (kind of hemp) is cultivated on the Bolkhov fields. It is possible to grow it in climate of Middle Russia. But there’s one thing. Hemp is similar to people – it degenerates in the 3rd generation. The plant accumulates narcotic, ramifies and loses its flexibility. It becomes wild. If a grower sees that there are several grafts from one root it’s a sign to have new seeds. And Larichev or chief engineer Vasiliy Demin goes to Penza to buy it.

Demin has been in hemp growing for 30 years. He’s director’s right hand. Larichev is in this industry since 1990.  But he has grown hemp since childhood. In Bagryanovo village people grew hemp in their own vegetable gardens. It was profitable. They processed hemp themselves and made oil from its seeds. The state bought it for a very high price. Today the factory would be glad to produce oil. Moreover it is used in medicines (some of them  for cancer). To be profitable 400 hectares need to be sown. But there is no special machines. Larichev has pedagogical education. He’s a teacher of mathematics. He used to work at school and he loved his job but then he was promoted. He became first secretary of district committee, then – kolkhoz chairman. He came to the factory after some scandal. Kolkhoz “Krasnoe znamya” where he managed was famous for swine breeding. People grew  pigs even in their own farms. And on Sundays practically all Kozulkino villagers went to local markets to sell pork and pigs. Larichev didn’t try to prevent it and even made Sunday a day-off. But people worked hard in other days. Regional authorities didn’t like it: “Nikolay Nikolaevich, why do all people work on Sunday and yours – do nothing?” Finally Larichev left the post of chairman in order not to have conflict with his people. It was hard time when Larichev got to the factory. The enterprise was considered to be successful (hemp was imported to other countries) but that year (the last year of Soviet Union) hemp spent the winter in the field. To provide the factory with raw materials they had to buy stock in Ukraine. The old hemp left from ex-director was picked only in spring. There was no easy year since that time. The factory was on the verge of bankruptcy. Only rope factories (the only who are interested in the industry) helped by lending money for harvesting. It was lucky to buy agriculture machines in disintegrated kolkhozes! But for tractors and combines it would be the end by now. Hemp growing is a rather difficult industry because of the handwork. Hemp is mowed by harvesters in the end of August. Then it must stay in rains and winds for a month. Green stalks turn in state when it is easy to get its fibre. Next the stock is picked in sheafs and brought to the factory. The equipment is old (for example short and long fibre lines – built in 1967) but it works. Fibre is devided in types (7 in all). Chaff (stalks) goes to stokehold. It’s the main advantage of hemp production – there’s no need in large amount of energy. Some parts of stalk are used as fire materials. It was also used to produce “kostroplita” (construction material) in the past. In all the factrory there grows 700 tonnes of stock per year. About 170 tonnes of hemp fibre they have as a result. Ropes are made from long fibre, cords and strings – from short fibre. Hemp growing is also profitable in the field. The crop rotation – hemp is sowed in particular field every other year. The best way to use these fields between is to grow potatoes. It’s interesting that hemp roots have ferment which kills potato beetle. But the factory doesn’t grow it because there are no special machines. But there is a harvester so workers sow wheat and barley. It is used for personal needs. Particularly for pigs (there’s a pigsty on the territory). Hemp growers always have meat and they are satisfied with it. Hemp has one more useful characteristic – it takes heavy metal salts out of land  It is very important for this territory because one day here came the rain from Chernobyl. The factory also has strategic stocks of hemp in order to pay salaries if bankruptcy happens. The stocks are still preserved, so far…